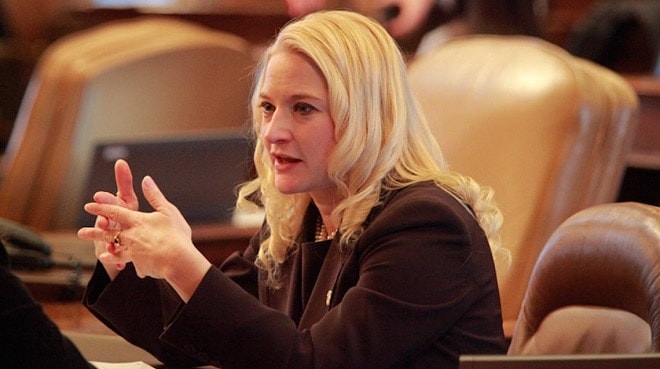 State Sen. Rebekah Warren, D-Ann Arbor, says she has a fix for Michigan’s stand your ground law that involves scrubbing it from the books altogether. (Photo: Michigan Senate Dems)

Claiming individuals are using the law as a reason to take someone’s life, a group of senate Democrats want to make a major change to the state’s self-defense statutes.

The measure would scrap the 2006 Self Defense Act that passed with significant bipartisan support and was signed by then-Gov. Jennifer Granholm, a Democrat who had before served as the state’s attorney general. It extended legal protections to those who use deadly force when threatened by death or severe injury without having an obligation to retreat if possible.

“Emergency room physicians and folks are just honestly worried about the prevalence of gun violence in our communities and frankly pretty nervous about the fact that there is no duty to retreat and substantial immunity from both criminal and civil liability under these statutes,” argues state Sen. Rebekah Warren, D-Ann Arbor, sponsor of the proposal to repeal the law.

Three other Democrats, including Senate Democratic Leader Jim Ananich, have signed on as co-sponsors of the legislation, for which Warren cites high profile court cases such as that of George Zimmerman and Trayvon Martin in Florida, as an example of why Michigan needs to rethink stand your ground.

“People are using this lack of duty to retreat as a reason to inflict harm and are sometimes not held liable for taking someone’s life. And I want to set that right in Michigan,” she said.

Her legislation, SB 611, was introduced earlier this month and, framed as a simple two-page repealer, would scrub the 2006 Self Defense Act from the state’s laws. Castle Doctrine, which allows for defense inside the home against an aggressor there illegally, would remain in place.

Stand your ground in Michigan withstood a 2012 repeal attempt in the state House by urban Democrats from the Detroit area while over 20 states have enacted similar laws in the decade since Florida’s model law was adopted.

Backers of stand your ground feel its needed.

“Whether they be black, white, Hispanic, or Asian, they all have the right to defend themselves from death, rape, and bodily harm. It’s un-American,” said Sen. Rick Jones, a Republican who sponsored Michigan’s stand your ground law, and argued in 2013 that the previous duty to retreat was a legal pitfall in defining justifiable homicide.

“People were supposed to retreat. There were even judges who thought you should retreat in your own home, when being attacked. It made no sense,” said Jones.

SB 611 has been referred to the Senate Judiciary committee.