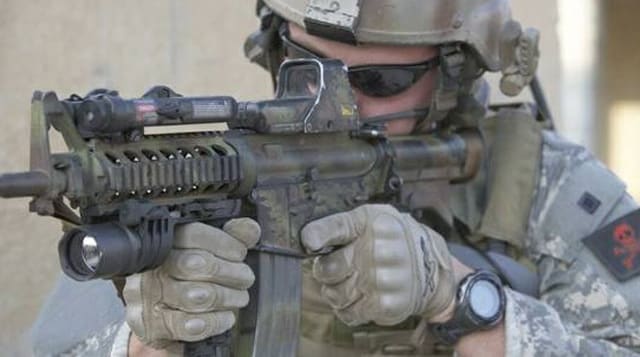 A soldier pointing a rifle equipped with an EOTech scope.

L-3 Communications Corp., a New York company that holds numerous contracts with the federal government, agreed to settle the matter the same day the civil complaint was filed in a Manhattan federal court, attorneys with the Justice Department told Guns.com.

Since 2004, L-3’s EOTech sold holographic weapons sights that they knew were defective to the Department of Defense, Department of Homeland Security, and the Federal Bureau of Investigation, the lawsuit says. EOTech was paid tens of millions of dollars in government contracts.

The lawsuit says in sub-zero temperatures the defect distorts the aiming dot within the optic by more than 20 inches fore every 100 yards.

The lawsuit adds that EOTech waited to disclose the problem until 2013, when the company thought they had a solution and then pitched the fix as an upgrade.

L-3 pulls in an estimated $12.6 billion in annual revenue and employees 48,000 people. Guns.com made repeated attempts to contact L-3 representatives, but they could not be reached for comment in time for publication.