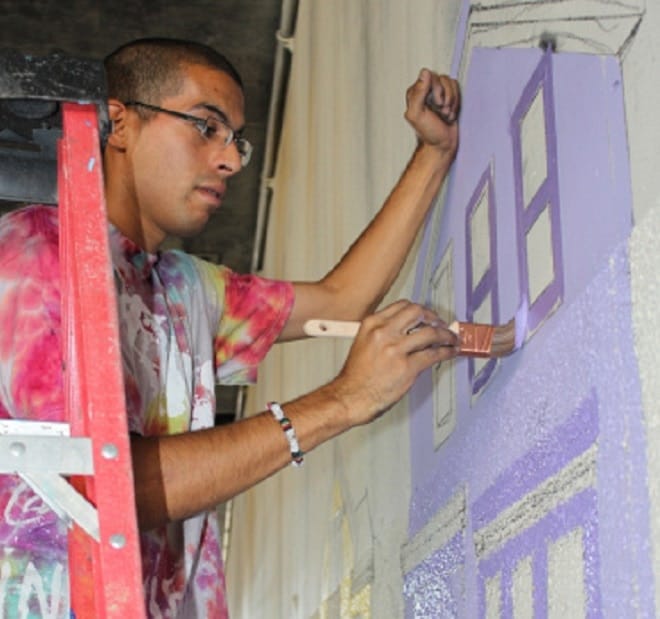 Artist Antonio Ramos was killed while creating a mural for the Oakland Super Heroes Mural Project with a gun stolen from a federal agent. (Photo: ahc-oakland)

The gun used in the fatal shooting of an artist in the San Francisco area in September was stolen from an Immigration and Customs Enforcement agent.

While creating a peace mural underneath the Interstate 580 freeway overpass as part of a local art project, 27-year-old artist Antonio Ramos was killed after an argument over his cameras. Charged with Ramos’s murder is Marquise Holloway, 20, who maintains he shot the artist by accident.

The gun Holloway used that day, a 9mm Glock 26, was stolen from the car of a federal agent in the area just two weeks before the shooting by a separate individual now in custody.

“The theft was properly reported to local authorities and through official federal channels. The matter is currently under investigation by ICE’s Office of Professional Responsibility,” ICE said in a statement.

The gun was one of no less than 144 lost or stolen from ICE agents since 2005, NBC Bay Area reported.

With some of the strictest gun laws in the country to include mandatory and controversial gun lock laws for firearms in the home and restrictions that have driven legal gun stores in the area out of business, the supply of firearms finding their way into the hands of criminals via thefts from law enforcement has led San Francisco to seek even more gun control measures.

Supervisor David Campos last month introduced a proposal to prohibit San Francisco city peace officers from leaving an issued firearm in a personal vehicle. This was designed to address shortcomings exposed in the aftermath of the fatal shooting of Kathryn Steinle on San Francisco’s Pier 14 in July.

Since its introduction, Campos has expanded the proposed ordinance to mandate all guns, even those owned by private citizens, be secured if vehicles under threat of a $10,000 fine and up to six months in prison. The only exception would be if the gun was secured in a locked container or locked truck separate from the main cabin of the vehicle.

As for Holloway, he is expected back in court Nov. 30 and will be assigned a public defender who will handle his case.