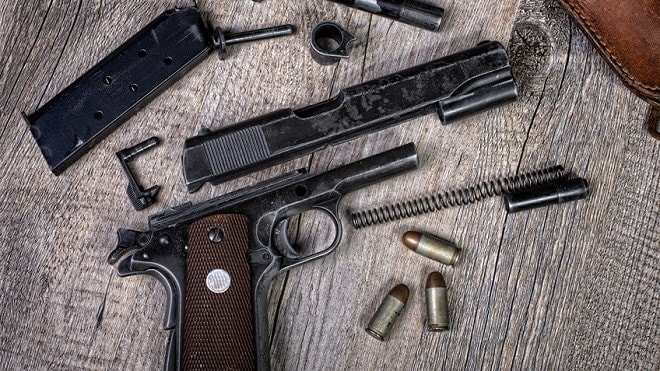 Setting spending policy for $612 billion in funds for the Department of Defense, the “must-pass” bill had been vetoed by the president last month but was pushed through Congress by veto-proof 91-3 and 370-58 margins in the Senate and House respectively, earning a nod from the White House on Wednesday.

The byzantine bill, with hundreds of amendments tacked on and subsequently modified or stripped away during its legislative process, included several pro-gun sections in its 584 pages of proposed public law in its final version. Among these is a proposal originally offered by Rep. Mike Rogers, R-Ala., which could see potentially the largest remaining stock of military surplus World War II-era handguns in government hands sold to the public through the CMP, a federally chartered non-profit corporation tasked with promoting firearms safety training and rifle practice.

In May, the lawmaker disclosed that the military currently spends about $2 per year, per gun to store 100,000 Model 1911s that are surplus to the Army’s needs. While 8,300 have been sold or disposed of in recent years – largely through the controversial Department of Defense’s 1033 Program, which offers eligible law enforcement agencies up to one pistol per full-time officer – the guns still on hand have in many cases been stored since the 1980s when they were withdrawn from service in favor of the then-new Beretta 92F (M9).

The NDAA will now authorize the CMP, currently just limited to selling .30-caliber and .22-caliber rifles, to receive and sell surplus M1911s acquired from the Army. It would not cover any surplus 1911s held by other branches such as the Navy and Air Force, those that may linger in federal law enforcement service, or other handguns such as surplus M9 Berettas or M11 Sig Sauers.

As outlined by the act, the Army would be restricted to transferring no more than 10,000 guns per year to the organization and the first would be handed over during a one-year pilot program. As part of the program, the Pentagon would have to report back to Congress both the exact number of guns sold as well as any information on any crimes committed using firearms transferred.  Also, the CMP would be have to obtain a federal firearm license to conduct any and all handgun sales, and adhere to all local, state, and federal laws in respect to those sales.

Earlier this year, the Army, prompted by the Department of Justice, threw doubt over transferring the 1911s to the public citing them as “untraceable” and referring to them as “popular crime guns.”

However, the CMP has an extensive vetting process for gun sales including requiring proof of citizenship, age, ability to pass an FBI background check and verified membership in an affiliated shooting club.

The CMP is a federally chartered non-profit corporation tasked with promoting firearms safety training and rifle practice. It originated as the Office of the Director of Civilian Marksmanship in 1903 under orders from Congress to improve the country’s marksmanship skills to minimize training in case of war. Split off from the U.S. Army under the Clinton administration in 1996, it still conducts training courses and holds shooting competitions nationwide but draws its primary source of funding through the sale of surplus firearms to qualifying members of the public, which were donated to the organization by the Army.

Collectors are excited about the prospect of the guns coming to market and downplayed their use in any potential crime.

“The guns would be prized collectibles and much less likely to be misused than the vast majority of firearms on the market today (legal or otherwise),” Bruce N. Canfield, a noted firearms historian and author of numerous books on post-Civil War weaponry, told Guns.com previously.

The Army guns are stored at the Anniston Army Depot, in a district which Roger’s represents and is coincidentally co-located to the CMP’s regional warehouse and store, which would minimize the logistics of a transfer.

The CMP told Guns.com on Friday that it has no further information at this time on how the guns would be transferred or when they will become available to the public.

Section 315 of the NDAA adds exceptions to the Toxic Substances Control Act for “components of shot shells and cartridges,” which will allow the military to continue to use traditional lead ammunition in stateside training over the objections of environmental groups.

Section 526 sets the requirement by the end of the year for the Secretary of Defense to establish a plan for base commanders to allow service members to carry personal firearms on base for self-defense. This comes after mounting calls to allow members of the military to do so following a terror attack on Navy and Marine recruiting and reserve facilities in Chattanooga, Tennessee, earlier this year.

Gun rights groups welcomed these two sections, coupled with the news of the looming 1911 transfer to the public on Friday.

“The enactment of these common sense, NRA-backed provisions into law is a result of the American people electing a pro-Second Amendment majority to the United States Congress,” said Chris W. Cox, executive director of the National Rifle Association’s Institute for Legislative Action in a statement.

The 3 Rs of the National Defense Authorization Act (recently signed into law!) #2A https://t.co/exLeHEVmrg pic.twitter.com/cvBP8SDrbf