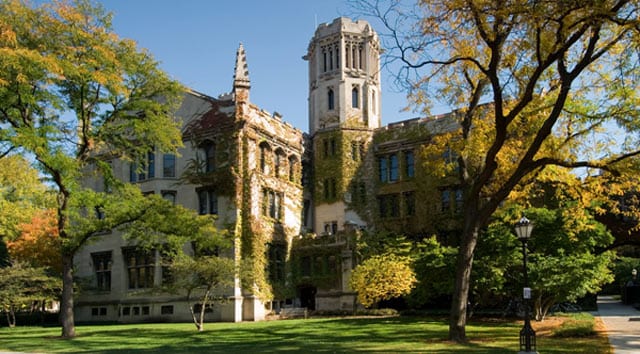 The University of Chicago is a private, nondenominational college described as “culturally rich and ethically diverse.” (Photo: Wikipedia)

Internet posts indicating plans of violence involving a gun prompted officials at the University of Chicago to cancel Monday’s classes at the Hyde Park campus.

All non-essential staff and students were told to stay home and students who live on campus were urged to stay indoors. According to a statement from Robert Zimmer, the university’s president, the threat, which was called to the university’s attention by FBI counterterrorism officials, mentioned a specific time and place – “the campus quad” at 10 a.m. Monday.

Zimmer sent out notifications via email and text to students and faculty around at 8 p.m. Sunday informing them of the decision to shut down the campus.

“Based on the FBI’s assessment of this threat and recent tragic events at other campuses across the country, we have decided in consultation with federal and local law enforcement officials, to exercise caution by canceling all classes and activities on the Hyde Park campus through midnight on Monday,” Zimmer said in the email.

One university student, who only wanted to be identified as Will, described the quad as being “very busy” on Monday mornings. The student said he has no plans to visit the campus Monday, and in fact, doesn’t plan to return to his classes on Tuesday either.

“For a threat like this, I want to give a few days to cool off,” Will told reporters. “I think it’s pretty extraordinary that the president interceded and canceled everything. I think that suggests something pretty serious is happening.”

Officials did not disclose any further details surrounding the alleged threat, but Zimmer confirmed the university has beefed up security on and around the campus and will continue to remain in close contact with the FBI as it continues investigating the threat.

Classes and all other scheduled activities are set to resume Tuesday.