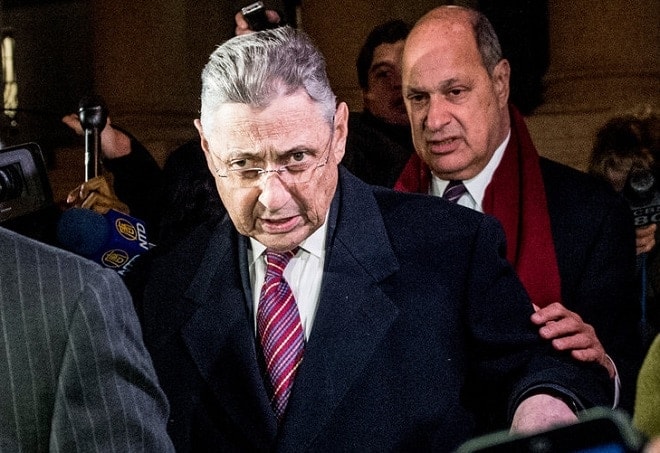 The former legislator was found guilty on all seven charges brought against him for taking $4 million in bribes and kickbacks since 2000.

Silver, 71, who was arrested in January and accused of amassing a tremendous personal fortune through the abuse of political power, had some $3.4 million in assets frozen by the Department of Justice.

A unanimous federal jury in Manhattan handed down guilty verdicts on four counts of honest-services fraud, two counts of extortion and one count of money laundering following a month long trial.

“Today, Sheldon Silver got justice, and at long last, so did the people of New York,” said U.S. Attorney Preet Bharara in a brief statement.

According to court documents, agents from the FBI discovered Silver collected kickbacks for helping to arrange real estate deals in Manhattan that included using his position to enhance. Further allegations include arranging state grants and funds to a physician who in turn referred lucrative patients to Silver’s law firm. Federal investigators contend Silver collected over $6 million from the firm for which he never actually performed any legal work.

First elected to New York’s 63rd District, which represents much of Lower Manhattan, notably Wall Street, in 1976, Silver became Speaker of the Assembly in 1994 and was subsequently re-elected 11 times. As such, Silver largely charted the course of legislation in the lower chamber of the New York state legislature for the past two decades. This included introducing the controversial gun control measure, the Secure Ammunition and Firearms Enforcement (SAFE) Act  of 2013, to the Assembly and helping to rush it through in record time.

“Today, justice was served,” said Cuomo in a statement released after the verdict was handed down. “Corruption was discovered, investigated, and prosecuted, and the jury has spoken. With the allegations proven, it is time for the Legislature to take seriously the need for reform. There will be zero tolerance for the violation of the public trust in New York.”

While Silver is looking at a stay in federal prison that could top 20 years, his attorneys plan to appeal and are confident in their case.

“Ultimately I believe after we file the legal challenges we will have a different result,” said attorney Steven F. Molo.