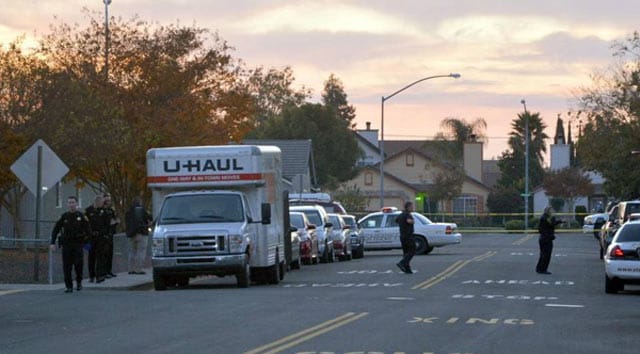 Stanislaus County Sheriff’s Deputies found the body in a crib in the back of the U-Haul Sunday. (Photo: Erin Tracy / Modesto Bee)

A man who was in a California jail following a domestic assault Saturday night now faces murder charges after deputies discovered a dead body in the back of a U-Haul while providing a “civil-stand-by” as the victim of the domestic dispute gathered her belongings in Salida Sunday.

Andres Garnica Serrato, 24, was arrested after allegedly assaulting his wife, whose name has not been released. Authorities also found Serrato to be in possession of an AK-47 with a high-capacity magazine, as well as methamphetamine and cocaine, the Modesto Bee reported.

Serrato later admitted to a detective that he shot and killed 31-year-old Joshua Luck, whose body was stuffed into a crib where it remained in the U-Haul from Phoenix to California.

Apparently the two men were neighbors and became engaged in an argument on Thanksgiving Day, at which time Serrato brandished a firearm. Tempers eventually appeared to have cooled and the following day Serrato apologized to Luck and offered to pay him if he helped him move, an offer which he accepted, according to Phoenix police Officer James Holmes. 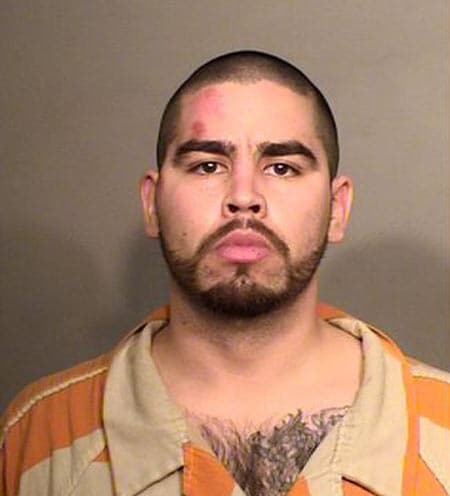 But Luck was reported missing early Sunday after he failed to show up to work over the weekend. After being contacted by the Stanislaus County Sheriff’s Office, the Phoenix Police Department obtained a search warrant for the Phoenix apartment from which Serrato had moved. Following the search, the department initiated the process to charge Serrato with murder. It’s unknown if the domestic violence victim was aware of the murder or the body in the back of the U-Haul.

While in jail, Serrato also assaulted two other inmates, and during his arraignment Tuesday, Serrato’s face appeared to be bruised as he complained to the judge that jail staff would not allow him to see or speak to his friends or family. The judge dismissed his complaints.

After reviewing Serrato’s violent history, including the pending murder charges, the judge determined Serrato would be a flight risk and a threat to public safety and increased his bail from $50,000 to $500,000.