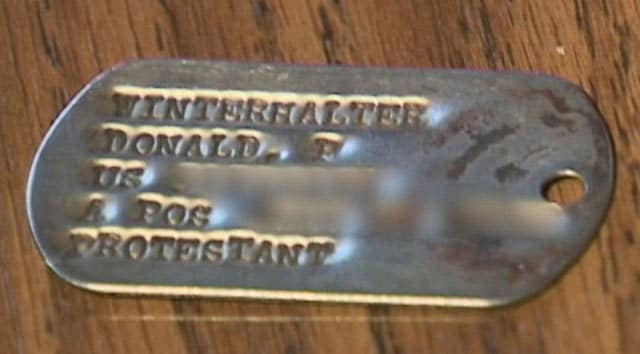 A 69-year-old Vietnam veteran was recently reunited with his dog tags he lost overseas nearly 50 years ago.

Retired Army Sgt. Donald P. Winterhalter served in the 82nd Airborne Division and did a tour in Vietnam in 1969. It was then that he lost his dog tags.

“It was an incredible story, it really was,” said Winterhalter, who now lives in Brookline, New Hampshire. “After 46 years, [the dog tag] wasn’t something I was thinking about.”

But when Dinh Vu returned to his home country of Vietnam for a visit several years ago, his mother-in-law handed him a pair of dog tags family members found in her back yard. Vu’s mother-in-law gave him the rusty piece of metal under one condition: He had to find the owner when he returned to the United States.

Vu, along with his neighbor, Don Edwards, who is also a veteran, contacted Purple Hearts Reunited, a nonprofit organization dedicated to returning lost military medals to their rightful owners, but Edwards and Vu were insistent on returning the dog tags in person.

“It’s different speaking with someone about it and having something in your hand that represents you of that time period,” Edwards said. “It means much more than going through the mail. I not only want to meet this gentleman but thank him for his service. Being in an organization full of combat vets, it’s always nice to meet vets from the Vietnam era.”

And as for Vu, he completed his mission.

“My job was to return the dog tags; that was my mission,” Vu said. “I just did my part. Mission accomplished.”

Winterhalter has since tucked away the dog tags in a desk drawer for safe keeping.