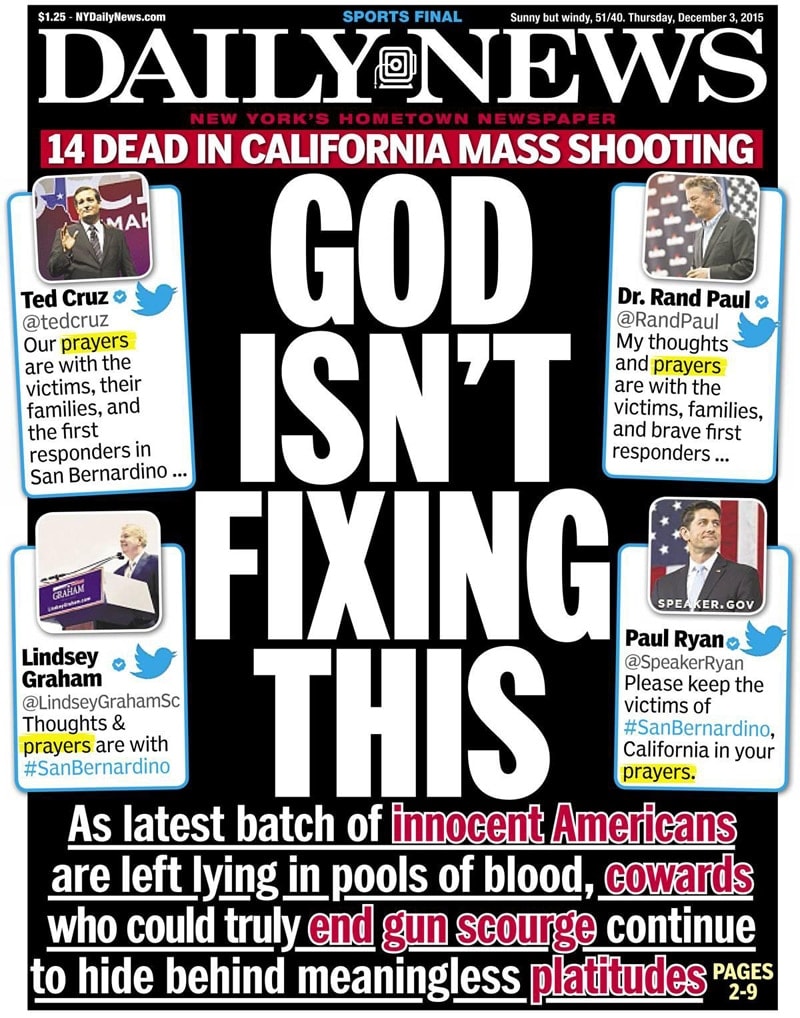 Cover of the Daily News on Dec. 3.

The New York Daily News highlighted Republican lawmakers response, or lack there of, to yet another mass shooting.

“God isn’t fixing this,” reads the front page of Dec. 3’s newspaper. Around the title are tweets by Republican leaders who offer prayers and thoughts rather than legislative solutions. Most of the Republican presidential candidates also offered “prayers” as well.

The headline represents the growing frustration on the political left and Congress’s lack of activity and perceived neglect by the right to prevent future incidents.

“As latest batch of innocent Americans are left lying in pools of blood, cowards who could truly end gun scourge continue to hide behind meaningless platitudes,” reads the subhead.

The newspaper highlights the GOP’s noticeable silence on the issue of gun violence after numerous high profile mass shootings across the country that have dominated nightly newscasts.

The headline echoes Connecticut Sen. Chris Murphy’s comments on Dec. 2, which were critical of Republicans after news broke of the San Bernardino shooting that left 14 dead and at least 20 injured.

“Your ‘thoughts’ should be about steps to take to stop this carnage. Your ‘prayers’ should be for forgiveness if you do nothing — again,” Murphy wrote on Twitter.

Many conservative commentators and leaders have suggested commenting on gun control or gun violence in the aftermath of mass shooting politicizes the incident.

Along with the most recent headline, the Daily News shared a gallery of 17 sensational covers with stories about mass shooting since a gunman opened fire inside an elementary school in Newtown, Connecticut, and murdered 20 first-graders and six educators.