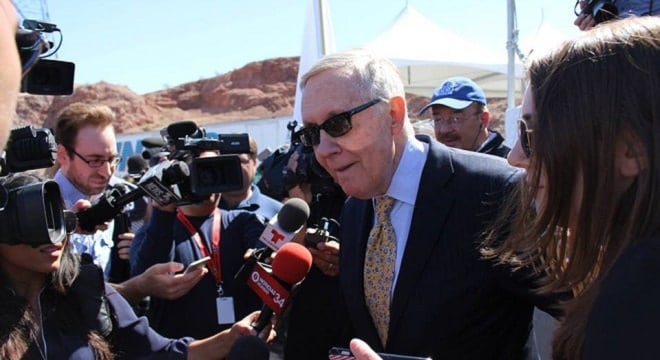 An amendment to a Republican effort to repeal Obamacare seeks to take guns away from those who have been convicted of misdemeanor crimes involving abortion clinics.

Senate Minority Leader Harry Reid, D-Nevada, is expected to introduce the measure on Thursday as reported by Politico. Under its guidelines, it would ban firearm possession by those who have convictions under the Freedom of Access to Clinic Entrances Act.

Reid, who contends the Affordable Care Act is working despite GOP assertions that it is not, blasted Congress for its apparent lack of action on gun control measures Wednesday in the wake of a mass shooting in San Bernardino, California that claimed the lives of 14.

“There is no excuse for inaction,” said Reid in a statement. “We cannot allow ourselves to grow numb to gun violence or to feel powerless in the face of it. We can, and must, make common sense gun reforms that can keep weapons out of the hands of dangerous criminals and the mentally ill. The American people are crying out for us to act. If we do not act, this distressing reality will not change.”

For his part in taking action, Reid’s plans to strip FACE Act violators of their Second Amendment rights, if adopted, may add few names to the list of prohibited firearms possessors under federal law.

Adopted in 1994 to discourage threats against abortion clinic staff and blockades of entrances, the law is seldom used.

The numbers have remained low under Obama.

During 2012, just two percent of the FBI’s civil rights caseload involved FACE Act violations and not all of those resulted in indictments. Further, in some cases such as one of a Kentucky man who grabbed and pushed a volunteer escort at a center in 2013, the Justice Department pursues civil cases for compensatory damages rather than criminal charges.

The National Abortion Foundation maintains the law has produced a chilling effect on clinic attacks, which peaked with the murder of Dr. David Gunn in Pensacola, 12 arsons and 66 blockades in 1993.

“Since its enactment, though anti-abortion violence continues, clinic blockades have dwindled to their lowest levels since they were first used to prevent women from accessing reproductive health care,” says the group.

Robert Lewis Dear, currently under murder charges for the killing of three people at a Colorado Planned Parenthood clinic had previously vandalized the doors of another clinic in Charleston, South Carolina, though it is unclear if he was ever charged with that act.

Gun violence has become a cancer on this nation. We must make common sense gun reforms that keep weapons out of dangerous hands.