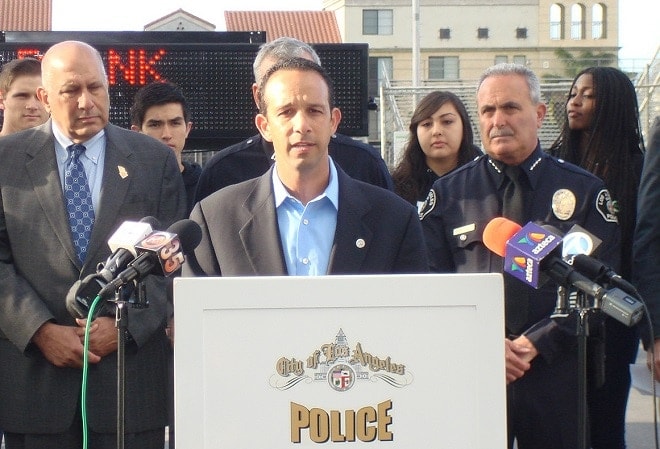 Councilman Mitch Englander spearheaded a drive to allow retired and reserve police officers in LA to keep their 10+ round magazines. (Photo: cd12.lacity.org)

The Los Angeles City Council on Wednesday approved a measure to exempt retired and reserve police from a new ban on grandfathered magazines capable of holding more than 10 rounds.

Mayor Eric Garcetti in August signed a citywide ordinance prohibiting the ownership of what the state deems large-capacity detachable firearm magazines – those capable of holding more than 10 cartridges. Although active law enforcement officers who lived in or worked for the city were exempted, retired and reserve lawmen were not.

This led to an amendment to the new law, introduced in October by Councilman Mitch Englander – himself a longtime LAPD reserve officer – to allow retired and reserve law enforcement officers to keep their magazines rather than turn them in, move them out of the city or sell them. The Council approved the measure in a 11-4 vote in a departure from their often seen unanimous votes on gun control issues.

“Could it happen? Anything can happen,” said Englander. “I would trust that 30- or 40-year officers who have put themselves in the front line to protect us have really our best interest at heart.”

Englander skipped over the fact that in 2013 a series of shootings ending in four murders were tied to Christopher Dorner, an ex-LAPD officer who contended he was wrongfully terminated in retaliation for reporting excessive force observed while on the job. After Dorner’s death, a number of California-restricted high capacity magazines were recovered.

The proposal, however, would only apply to those who left their agencies in good standing according to Englander.

The move to adopt the exemption was championed by police lobby groups but opposed by City Attorney Mike Feuer who felt doing so put the city under “significant legal risk” of potential litigation as a 2002 decision by the U.S. 9th Circuit Court of Appeals held that such protections are such a violation of the Constitution on 14th Amendment grounds.

Besides Feuer’s misgivings, there was significant opposition to passage from members of the council themselves on much the same lines.

“The danger is that retired police officers are not necessarily magically any different than anybody else” and could suffer depression or other problems after retiring, said Councilman Paul Koretz, one of four who voted against the measure.

The measure will come up for a second vote on Dec. 9.