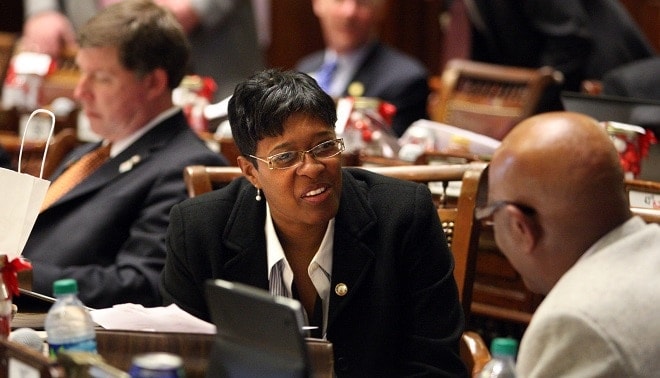 An Atlanta Democrat is seeking to require “common sense” firearms training of all those applying for or renewing Georgia weapons carry licenses.

The proposal, pre-filed in the House last month, according to bill sponsors is not political but is needed to help curb gun violence.

“This is simply a means to protect people and get them to think about safety,” said Rep. Keisha Waites, D-Atlanta. “We need to move away from the conversation about gun rights. This is purely a public safety situation.”

Waites’ measure, HB 709, would require those applying for new or renewed concealed carry permits to show proof of firearms training in the past three years. While the legislation is mum on how extensive the training should be, it does require that instruction on loading, firing, and unloading of the handgun be delivered and that live firing shall not be required.

Exemptions in place for active duty military, Georgia National Guard members, law enforcement and recognized firearms instructors. Curiously, while firearms dealers are not exempt, they are, along with police officers and certified instructors, empowered to deliver training.

Two of Georgia’s neighbors, Tennessee and South Carolina, have training requirements for concealed carry while Alabama and Florida do not. The state has over 600,000 permit holders putting it among one of the largest in the nation.

Gun rights advocates in the state argue a training requirement is unconstitutional.

“There are no studies that show any state that requires training to be any safer than any state that does not require training so where is the need for such an infringement of the Second Amendment?” Jerry Henry, executive director of Georgia Carry told Guns.com Wednesday. “No other constitutionally enumerated right requires training before a citizen may exercise that particular right.”

Henry says his group supports training for all persons who carry firearms but is against government-mandated training for several reasons. Foremost, he argues it adds both a cost and time requirement for someone to be able to exercise their right to carry.

“One of the main purposes of the gun prohibitionists’ goals is to make the cost of lawfully exercising your right to carry so expensive that many persons who have a fixed or low income will not be able to obtain a license,” explained Henry. “There will be the additional cost of the training plus the time off from work as well as travel expenses to and from along with sometimes long periods of waiting time for training class time to become available. Gun control by economic status.”

Moreover, Henry argues that government mandated training convinces concealed carry holders they have become proficient in firearms use to the state guidelines and will need no further training.

“We also feel the government has absolutely no way of knowing what each individual needs in the way of training. Many persons have had training in the past and don’t need to spend time learning how to load their firearms. Each individual is different in their needs and abilities. Many of our members spend hundreds of dollars per year to maintain the training they feel they need. Each individual should be allowed to determine the level of training they wish to obtain with no outside intervention,” said Henry.

As for the bill’s likelihood of success in the Republican controlled House, prospects are bleak.

Rep. Alan Powell, R-Hartwell, chairman of the Public Safety Committee in which it would have to pass, said it’s “pretty much impossible” that Waites’ bill advances.