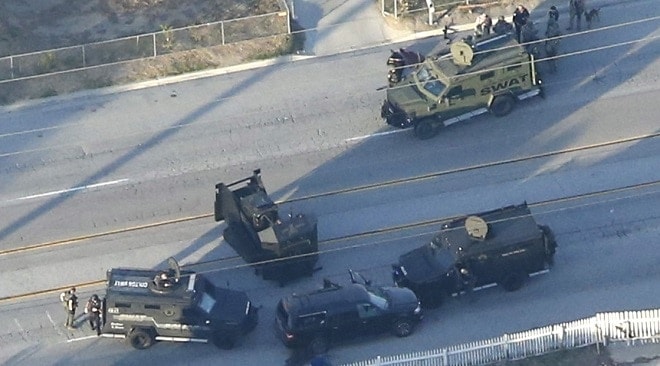 An SUV with its windows shot out that police suspect was the getaway vehicle from at the scene of a shooting in San Bernardino, California is shown in this aerial photo Dec. 2, 2015. (Photo: Mario Anzuoni/Reuters)

The end for two suspects now being described by the FBI as potential terrorists came at the hands of several armored police vehicles including one souped-up tractor.

The final act of Wednesday’s mass killing of 14 at a holiday party in San Bernardino, California was a shootout between suspects Syed Rizwan Farook, 28, and Tashfeen Malik, 27, and police about two miles away from the Inland Regional Center crime scene. 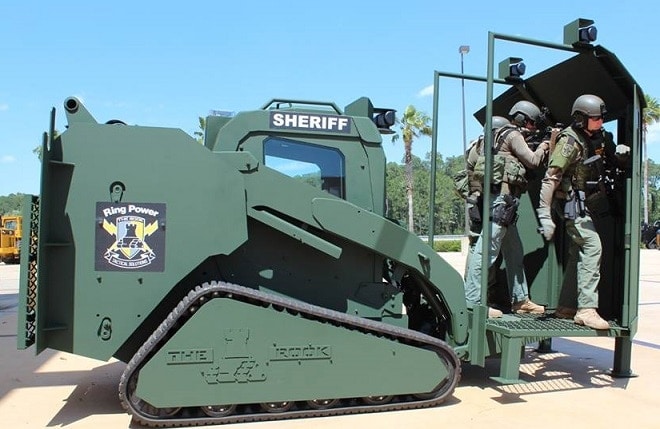 Not your average Bobcat

It uses an Armored Deployment Platform to allow officers to be pushed to the scene of an incident or, if needed, boosted to up to 11 feet to a second floor of a structure, all while behind both cover and concealment.

As noted by the manufacturer, “In a vehicle takedown, the platform can also be slanted downward so shots can be fired into a car without endangering pedestrians or other passersby.”