Sheriffs urging concealed carry holders to do so following attacks 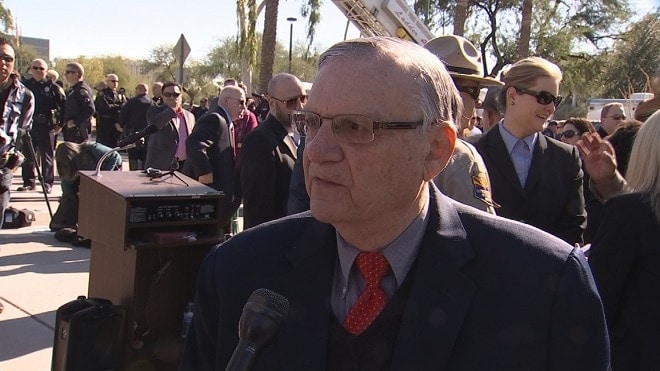 Sheriff Joe Arpaio in Arizona is among those this week advocating for more concealed carry as a means to help end active shooter incidents. (Photo: KPHO/KTVK)

Two sheriffs on opposite sides of the country this week are urging citizens licensed to carry a firearm to please do so in light of recent events.

Among those asking citizens to carry every day is controversial Maricopa County, Arizona Sheriff Joe Arpaio who on Tuesday publicly advised the state’s 250,000 permit holders that having a ready firearm could mean a difference between life and death in an active shooter incident involving a terrorist or other mass shooter.

“I’m just talking about the areas where you have large crowds and someone pulls out the gun and starts shooting. Maybe somebody with a concealed weapon takes the guy down,” Arpaio said.

On Thursday, following an attack in San Bernardino, California by at least two individuals that left 14 dead and another 17 injured, the chief law enforcement officer of Ulster County, New York made a similar call to arms.

“In light of recent events that have occurred in the United States and around the world I want to encourage citizens of Ulster County who are licensed to carry a firearm to PLEASE DO SO,” wrote Ulster County Sheriff Paul J. Van Blarcum in a post to social media.

“I urge you to responsibly take advantage of your legal right to carry a firearm. To ensure the safety of yourself and others, make sure you are comfortable and proficient with your weapon, and knowledgeable of the laws in New York State with regards to carrying a weapon and when it is legal to use it,” said Blarcum.

“Sometimes it’s not proper to pull the trigger because the collateral damage is not worth it,” Henry said. “We don’t want to walk into a gun fight between anybody, much less a gun fight where people are untrained.”