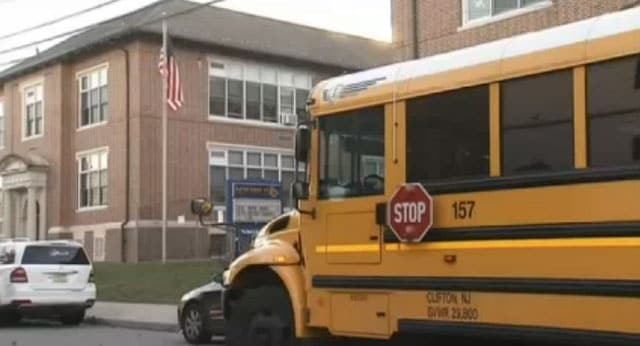 Despite the lack of any real danger, some parents opted to keep their children home after the incident. (Photo: NBC)

Five preteen kids were arrested in New Jersey Wednesday morning after authorities discovered the group had plans to set off a homemade bomb during an assembly at a Clifton high school.

Clifton Police spokesman Robert Bracken said the students, who were 10 and 11 years old, had written plans detailing their intentions to “cause harm,” and were found to be possession of a homemade explosive device while on a field trip for an assembly at School 11.

However, Bracken assured there was never any real danger because the device, which contained vinegar and cinnamon, was nonfunctioning, according to reports from a local NBC affiliate. Bracken added that despite the device being a fake, the plans weren’t and the malicious intent was there. Authorities also believe the children had outside help in planning and creating the device.

The group of kids, at least two of whom were girls, was arrested during the assembly as fellow students watched them being walked out by the police around 9:30 a.m.

“The bomb squad was there, and the cars and the kids were outside, and they were crying,” student Alyson Pineiro described to reporters.

Students and parents alike were shocked to hear about the plans.

“I know the girls and they are good girls, and I don’t think they would do something like that,” said Yusuf Alnator, who is friends with the girls, who she said are on the school’s safety patrol.

The young suspects have since been released from jail into the custody of their parents. They have all been suspended, but the school continued to be on tightened security as of Thursday afternoon.

After the incident, some parents expressed frustration over the school’s seeming lack of communication.

Maria Bajdas, whose four children attend the school, said she wasn’t even notified until nearly 24 full hours after the incident occurred. She questioned school administrators, who, according to Bajdas, said, “It was too many kids and parents and it would have been chaos.”

Bajdas, not comfortable with the response, kept all four of her children home the following day.

Another parent, Natalie Naranjo said she was upset that she heard about the incident on the news rather than from school officials.

Besa Cake, who also has children in the school, said it’s really scary to know what the kids planned.

“They shouldn’t be thinking about this,” she said. “It’s not good.”