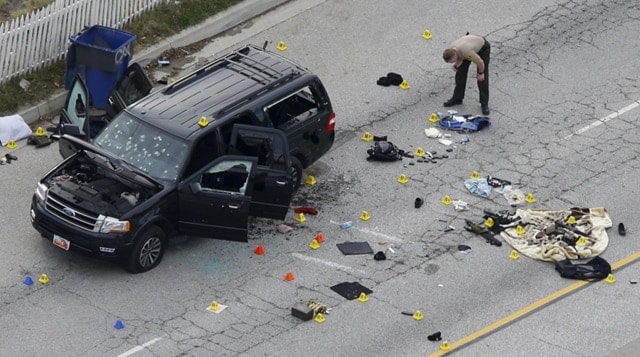 A law enforcement officer looks over evidence at the scene of a shootout in San Bernardino, California. (Photo: Reuters)

More gun control isn’t the answer following shootings like the one that occurred in San Bernardino on Wednesday, according to gun rights groups and Senate Republicans.

The GOP shut down Democrats’ recent attempts to push through several pieces of legislation, including a bill that would have closed the so-called “terrorist loophole,” denying guns to those on the federal government’s secret terror watch list.

It’s unknown if shooters Syed Rizwan Farook and Tashfeen Malik could have been stopped in the killing of 14 and wounding of 21 others – the deadliest shooting since Sandy Hook – if suspected terrorists on the list were prohibited by the proposed law.

Public knowledge of the secret list could hamper any investigations of those individuals, a spokesperson for the FBI’s Terrorist Screening Center told Guns.com.

What is known related to the status of the firearms used in the shooting is that they were purchased legally. The San Bernardino Police Department, who is heading the investigation, said the weapons used by the shooters that morning included two rifles and two handguns. The Bureau of Alcohol, Tobacco, Firearms and Explosives confirmed that to Guns.com.

It’s unknown if the rifles included bullet buttons – so-called because bullets are typically used, though other tools can also be utilized, to release the rifle magazine. Rifles without the precautionary function are illegal to purchase or possess in California if not done so before the state’s assault weapons ban took effect in 1989. Those exempt from the ban are required to register their rifles with the state.

The modifications were put in place, along with a 10-round magazine limit, to prevent the semi-automatic rifles from being reloaded quickly.

One of the weapons in the shooting had reportedly been modified to fire in fully automatic mode, but government field tests revealed that attempt had failed.

It was during a holiday party at the Inland Regional Center around 11 a.m. that the shooters walked into the building and opened fire. Farook, a health inspector with Los Angeles County, reportedly worked in the building and was at the party earlier in the morning. He then left and returned with Malik and several weapons, including an improvised explosive device made out of three pipe bombs and a remote control toy, authorities said during a press conference Thursday morning.

The incident prompted a multi-agency response, with approximately 300 officers from seven local, county, state and federal agencies on the initial scene and the location the suspects later engaged in a shootout with police, where 23 officers fired about 380 rounds at the suspects in a black Ford Expedition. The vehicle was rented Tuesday, authorities said.

“Clearly they were equipped and were capable of another attack, but we stopped them,” San Bernardino Police Chief Jarrod Burguan said in response to a question from the press.

A list of the victims’ names has been released by the San Bernardino County Coroner’s Office.

“This shooting has caused each victims family, friends and co-workers, along with the first responders, to suffer an enormous personal tragedy. We must stand strong and offer support to each individual affected by this senseless attack,” said Sheriff John McMahon in a statement Thursday.