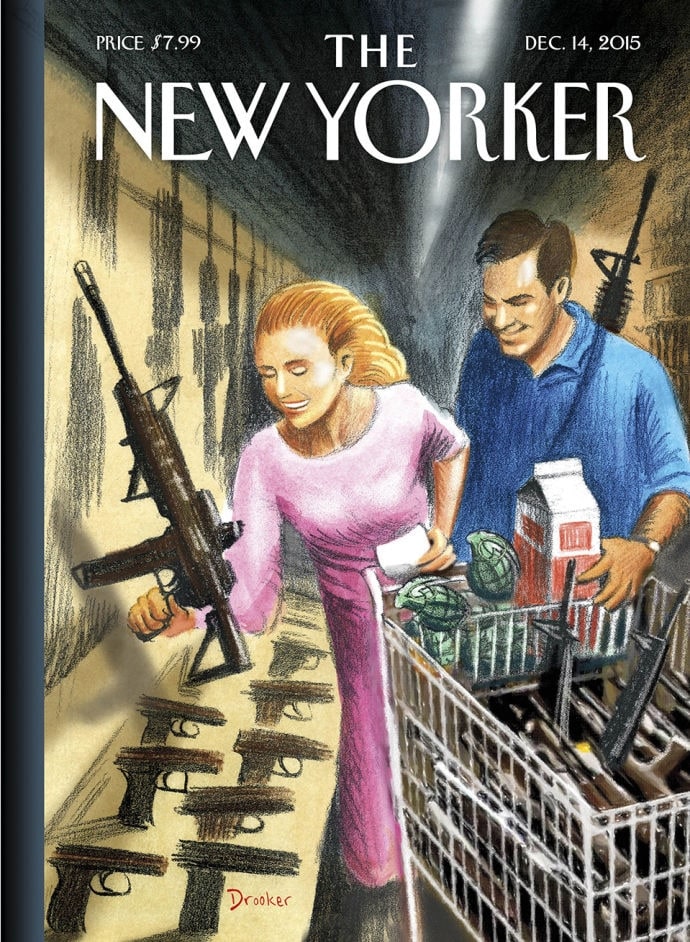 Following a spurt of mass shootings, the debate over what to do or what not to do to prevent future tragedies resumes and with it come a host of opinions.

The New Yorker explores the proliferation of gun in the U.S. — estimates put it at more than 300 million — in an upcoming issue.

“What would it look like if I took America’s obsession with firearms to its logical extreme?” says the artist Eric Drooker about his New Yorker cover for the issue dated December 14, 2015. The proliferation of guns and the too-easy access to military-grade weapons is not the only story in San Bernardino, but it’s an appalling part of it. As John Cassidy points out in a recent essay, there are an estimated three hundred million guns in private hands in the U.S., and gun sales soared on Black Friday. And somehow, despite the growing demand for restrictions and background checks, the sales go on and, with them, the daily shootings. If only Eric Drooker’s image were a fiction.

The cover shows a man and a woman pushing a shopping cart inside a firearm retail store, grabbing guns as you would other consumer goods.

The New York Daily News also created a notable cover in the wake of the shooting in San Bernardino, which called out Republicans for offering platitudes rather than solutions. However, most conservatives speakers suggest talking about the ways to prevent the tragedy (mainly if it involves gun control) exploits the incident for political gain.

Besides the ubiquity of firearms, the cover encompasses commentary on 2015’s Black Friday shopping, a day that saw a record setting day for background checks before gun sales, which suggests roughly 185,000 guns were sold in a single day.