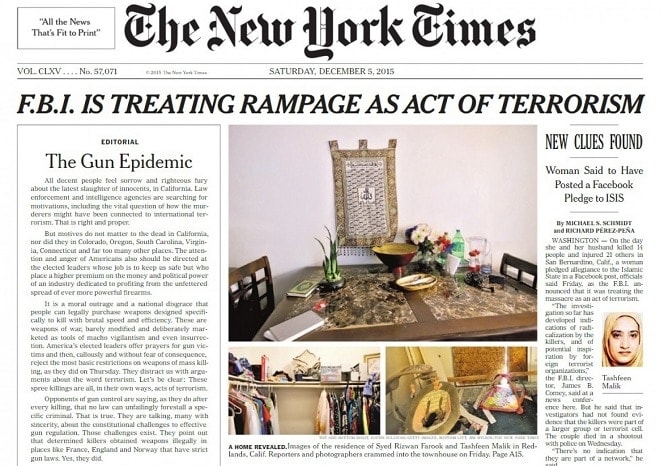 In its first front-page editorial published since 1920, the Times on Saturday called for people who own, “those kinds of weapons to give them up for the good of their fellow citizens.”

The publication, established in 1851 and long considered the nation’s paper of record, ran the 500-word opinion piece attributed to its editorial board, entitled “End the Gun Epidemic in America” on the A1 page of the Dec. 5 edition.

In it, the Times acknowledged that all should feel a “righteous fury about the latest slaughter of innocents” in a string of mass killings from Colorado to Oregon to Connecticut and California, but that in conjunction with that rage, gun control measures should be enacted.

It is a moral outrage and a national disgrace that civilians can legally purchase weapons designed specifically to kill people with brutal speed and efficiency.

These are weapons of war, barely modified and deliberately marketed as tools of macho vigilantism and even insurrection. America’s elected leaders offer prayers for gun victims and then, callously and without fear of consequence, reject the most basic restrictions on weapons of mass killing, as they did on Thursday. They distract us with arguments about the word terrorism. Let’s be clear: These spree killings are all, in their own ways, acts of terrorism.

Contending the Constitution is not an absolute protection, the piece then outlined the justification for a ban on various guns and ammunition, followed by surrendering those items newly prohibited.

It is not necessary to debate the peculiar wording of the Second Amendment. No right is unlimited and immune from reasonable regulation.

Certain kinds of weapons, like the slightly modified combat rifles used in California, and certain kinds of ammunition, must be outlawed for civilian ownership. It is possible to define those guns in a clear and effective way and, yes, it would require Americans who own those kinds of weapons to give them up for the good of their fellow citizens.

The Times, however, failed to mention that its own analysis, as exemplified in an extensive piece published last September entitled, “The Assault Weapon Myth” largely debunks the effectiveness of the federal assault weapons ban.

Further, it should be noted with some irony that New York Times owner and editor Henry Raymond defended the paper’s offices during the Daft Riots of 1863 against rioters by installing a battery of three privately-owned Gatling guns, one of which he personally manned.  At the timed the Gatling gun, whose inventor hoped was so terrible it would help end war more rapidly, was so advanced the Union Army only had 10 – purchased with private funds.

Regardless, the editorial was quickly covered around the world, with media ranging from the Times of India to Australia’s SBS News republishing excerpts from the piece.

Back home, the piece was applauded by pro-gun control politicians such as Connecticut Democratic Sen. Chris Murphy, who reposted it on his social media account with the heading, “If you read one thing today…” and California Sen. Dianne Feinstein who called the piece “Spot-on.”

On the other side of the political spectrum, responses were harsh with New Jersey Gov. Chris Christie telling Face the Nation host John Dickerson, “It’s typical liberal claptrap from the New York Times.”

“I am glad that they have finally come out of the closet and admitted that they want gun confiscation rather than hide behind terms like gun safety and common sense gun control,” he said. “It is hard to defend their First Amendment rights when they use them to attack our Second Amendment rights. They need to be told that you can’t pick and choose which part of the Bill of Rights to support or reject.”