SCOTUS turns away 2A challenge of Chicago assault weapons ban 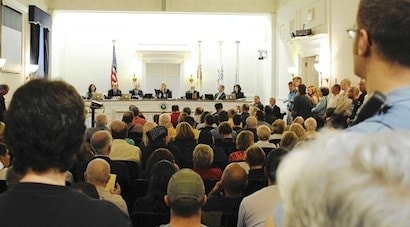 The U.S. Supreme Court on Monday declined to define the types of firearms that can be banned under local, state and federal law, turning away a Second Amendment challenge to Chicago’s assault weapons ban.

In a 7-2 vote, with justices Clarence Thomas and Antonin Scalia dissenting, the decision upheld the city’s prohibition on semiautomatic weapons with a capacity of 10 or more rounds, the Los Angeles Times reported.

The 2013 ordinance included on its list of prohibited guns the popular AR-15, considered an assault weapon under the ban because of its likeness to the military’s M-16 rifle, though manufactured to not fire automatically with one trigger pull.

The justices gave no reason for turning down the appeal after months of reviewing the case, but their decision was likely not affected by recent mass shootings, SCOTUS blog reporter Lyle Denniston contends.

In upholding Chicago’s ban, the dissenting justices said, the 7th Circuit Court of Appeals in its April decision to uphold the ban went against the high court’s 2008 District of Columbia v. Heller decision, which gave self-defense protections to individuals under the Second Amendment.

“One’s fundamental civil liberties protected by the Second Amendment ‘shall not be infringed’ in order that someone else might ‘feel’ safer by banning the most commonly purchased firearm and standard size magazines,” Larry Keane, senior vice president and general counsel for the National Shooting Sports Foundation, who filed an amicus brief, told Guns.com in April.

Circuit Judge Frank Easterbrook was criticized for writing at the time that assault weapons bans are valid as long as they “make the public feel safer.”

The Chicago decision comes after last week’s deadly shooting in San Bernardino, California, where 14 people were killed and 21 others wounded when a man and woman walked into a government building armed with several rifles and handguns and opened fire.

Though the rifles allegedly used by Syed Farook and Tashfeen Malik were purchased legally in California, authorities said, they were modified to fire in automatic mode. Government tests of the rifles concluded that modification had failed.