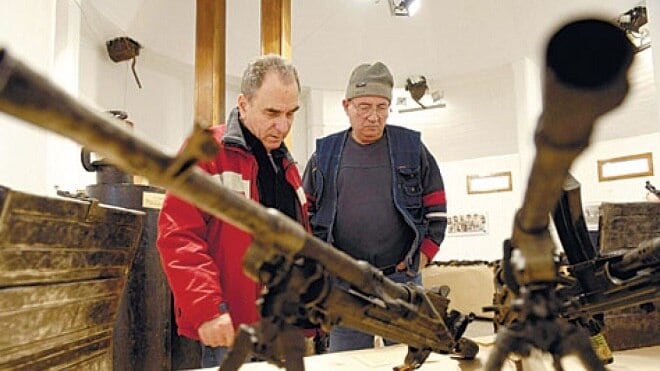 British Bren light machine guns dating from the 1940s found hidden on an Israeli kibbutz area in 2009. Wait for the tie-in in just a bit. (Photo: Moran Mayan/Haartez)

A renowned professor of socioeconomics penned an editorial advocating gun prohibitions– although he once blew up a radar station as a guerrilla in civilian clothes himself.

Amitai Etzioni, a professor of international relations at George Washington University, wrote an opinion piece for the Huffington Post on Monday in which he scoffed at the current proposed gun control measures such as expanded background checks, and called for a more expansive approach.

“Universal background checks of gun buyers is a fine idea, but of limited value in a nation in which citizens already own 250 million guns, more than one for every adult,” said Etzioni.

Likewise he brushed off magazine limits and mental health expansions. Instead, he called for more of a “no-guns” sort of policy for individuals, instead allowing firearms only for the government, military and police, as accomplished incrementally.

“Make the gun manufacturers liable for harm done with their products. Ban the sale of ammunition. And vote for a president that will add to the Supreme Court those who will read the Second Amendment as written,” Etzioni proposed. “Above all, domestic disarmament is a true, compelling vision which cannot be said about the small gun control measures that are currently promoted by some of the most enlightened people among us.”

Ironically, Etzioni has not always followed the path of civilian disarmament– or trust in the local government.

The renowned expert on communitarianism was born Werner Falk in pre-Hitler Germany and later relocated to British-controlled Palestine with his family, fleeing Nazi persecution of the Jews. Taking a Hebrew name, he joined the Palmach insurgent forces in the region and fought in a guerrilla war against the British.

“One evening, we attacked a radar station near Haifa,” wrote Etzioni in a 2002 opinion piece on terrorism for USA Today. “A girl and I, in civilian clothes and looking as if we were on a date, casually walked up to the radar station’s fence at the same time half a dozen others did. We cut the fence and placed a bomb. It exploded, but the British shot our leader in the head and we retreated. We disappeared into the crowd milling around in an adjacent street.”

As reported by Haaretz in 2011, vintage secret weapons caches and stockpiles from Jewish underground groups such as Etzioni’s are still being uncovered in Israel today, often hidden in unlikely spots.

“The point of departure for those in the Jewish Yishuv who hatched the idea of building weapons caches in places such as synagogues, women’s rooms, children’s houses,” explains author Rephael Kitron, “was that British officers and troops were gentlemen who wouldn’t dare to search in such places.”