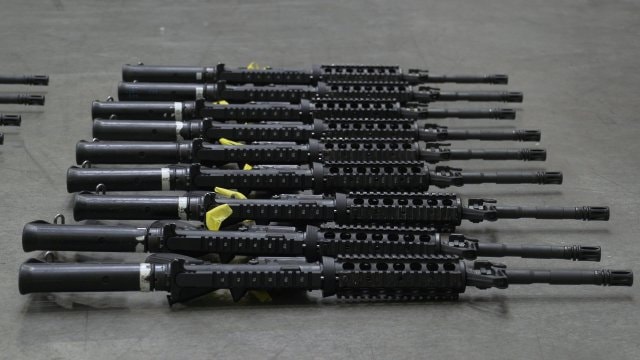 A set of new M4A1 carbines at Fort Riley, Kansas. They were fitted with thicker barrels in May, 2014. (Photo: Army)

Remington Arms named the federal government, FN America and Colt Defense in a lawsuit over a contract to provide weapons to the U.S. Army.

Attorneys with Remington filed the complaint in federal claims court on Nov. 24 and requested it and other court documents be sealed throughout the litigation, which the court agreed to.

In the motion to seal the documents, Remington said it wanted to protect proprietary information listed in proposals sent to the U.S. Army’s contracting office.

Although details are sealed, the motion lists a solicitation number to a October 2014 notice by the Army for a contract to produce 292,000 M4 carbines. In September, the Army awarded the contract, valued at $212 million, to both FN and Colt.

The court issued a protective order on Dec. 1 that details rules for the case proceedings and protects competition-sensitive information, to which all parties agreed compliance. Also, the court set deadlines for hearings. Defendants have until Jan. 25 to submit answers to the complaint, and oral arguments are scheduled for Feb. 26.

Remington is part of the larger Remington Outdoor Company, which is headquartered in North Carolina and has an annual revenue of $815 million, but the company has been transitioning to a new plant in Huntsville, Alabama. In November, Moody’s Investor Service downgraded ROC to a “poor quality” investment and said it has a “very high credit risk.”

A number of contracts to produce the M4 have been up for grabs since Colt’s contract ended in 2009, when the Army proposed a series of modifications for the design.

Initially, Colt was awarded the contract in 2010 to produce the weapons and conversion kits and then in 2012 the Army awarded contracts to both Remington and Colt. But once Remington met its quota, Colt sued the Army, citing miscalculation of royalty payments it should receive for the M4 design. As a result, the Army dismissed the contract and later awarded the remainder, valued at $77 million, to FN in 2013.