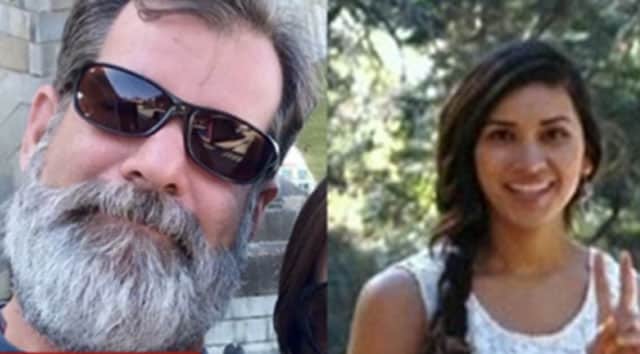 Shannon Johnson, left, wrapped his arms around Denise Peraza, right, shielding her with his own body to protect her. (Photo: CNN)

One of the surviving victims of the mass shooting in San Bernardino last week is speaking out because she wants the world to know that 45-year-old Shannon Johnson, who died during the shooting, is a hero who made the ultimate sacrifice to protect her.

According to 27-year-old Denise Peraza, just five minutes before Syed Rizwan Farook and his wife, Tashfeen Malik, entered the room and sprayed over 60 rounds, she and Johnson were sitting next to each other, joking about how they believed the clock was broken because the time was barely moving as the holiday party they were attending was dragging on.

Minutes later, terror struck and Johnson became a savior and a hero.

“I will always remember his left arm wrapped around me, holding me as close as possible next to him behind that chair,” Peraza said in a statement given to CNN. “And amidst all the chaos, I’ll always remember him saying these three words, ‘I got you.’”

Johnson used his own body to shield Peraza from the bullets. Peraza, who was struck in the back but expected to make a full recovery, survived the attack; Johnson did not. Altogether, 14 people died that day and another 21 were injured. The couple responsible for the shooting, which is now being investigated as an act of terrorism, were later killed after engaging in a shootout with authorities.

Peraza believes it was the selfless actions of Johnson that saved her life, and Johnson’s girlfriend of three years, Mandy Pifer, was not surprised by what he did. Pifer said Johnson was a large man with a long beard, covered in tattoos with a seemingly rough appearance, but he was an “amazing man,” the kindest she had ever known.

Johnson, who he and many others thought was friends with Farook, had been an employee of San Bernardino County for over a decade, and Pifer said he loved his job. Peraza, who was recently married in April, shared an office with Johnson until about two months ago when he was transferred. The two were delighted to see one another again at the holiday party, but neither of them imagined it would be Johnson’s last day on Earth.

Pifer said with the recent number of shootings, her and Johnson actually discussed what each of them would do in that sort of scenario. Pifer had no qualms with admitting she had no desire to be a hero and would hightail it out of there if ever in that situation. Johnson, however, told her he would engage the shooter, go after him or her and attempt to disarm the threat.

“He was not afraid to die,” Pifer said.