States bristle at being termed 'gigantic back door' on terrorism 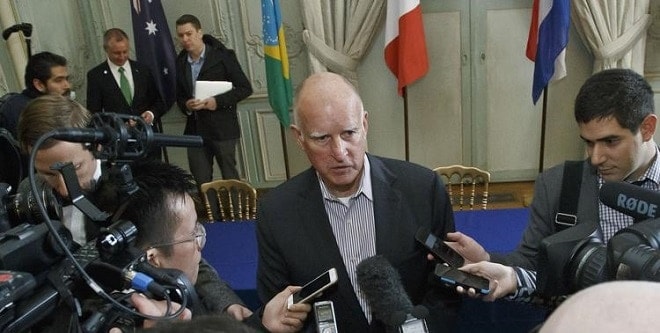 While in France to speak at the United Nations summit on climate change, Gov. Brown pinned his state’s terrorism problems its neighbors. (Photo: Matt Hartman/Associated Press)

The remarks by Brown, a long-term Democrat who has signed a multitude of gun control measures into law, came Saturday as he arrived in France to weigh in on global warming talks. Coming on the heels of an attack that left 14 dead and 21 wounded in San Bernardino, the governor threw nearby states conned by Republican governors under the bus.

“California has some of the toughest gun control laws of any state,” said Brown. “And Nevada and Arizona are wide open, so that’s a gigantic back door through which any terrorist can walk.”

The Sacramento Bee labeled the Governor’s remarks somewhat misleading, pointing out that the four weapons used by the San Bernardino subjects were legally purchased between 2007 and 2012 in California and neither Nevada nor Arizona had any connection to the firearms. However, they did note that — based on research from Bloomberg gun violence groups — gun export rates in 2009 for Arizona and Nevada were well above the national average while California’s was well below.

Brown’s comments brought quick response and a call for retraction from his counterpart in Phoenix.

“All of Arizona mourns for the victims in California,” said Arizona Gov. Doug Ducey in a statement released Saturday. “To politicize a tragedy of this magnitude and use it as an opportunity to attack our state is out of bounds. Not only will we be ignoring Gov. Brown’s advice, but I call on him to retract his incredibly thoughtless and ill-advised comments.”

“Nevadans share California’s grief during this time of tragedy following the horrific events in San Bernardino,” said St. Martin. “However, Governor Brown’s assertion that our state laws create an opening for terrorists is wrong and irresponsible. This type of political rhetoric is discouraging to hear at a time when all Americans are looking for thoughtful, honest leadership. Governor Sandoval’s top priority has always been the safety and well-being of Nevadans and the millions of tourists who travel to our state annually.”

Since resuming office in 2011, the now-fourth term Brown has signed numerous gun control measures into law including a ban on open carry, instituted registration for new long arm purchases, approved a confiscation scheme for those with mental illness, adopted controversial gun violence restraining orders, placed restrictions on guns coming into California from other states, ended the so-called single-shot exemption for handguns, and rolled back campus carry.

Nonetheless, the San Bernardino shooting is the worst mass killing in the country since the 2012 Sandy Hook elementary school shooting in Newtown Connecticut that ended the lives of 26 students and faculty.