Is Trump off the mark in calling to keep Muslims out? 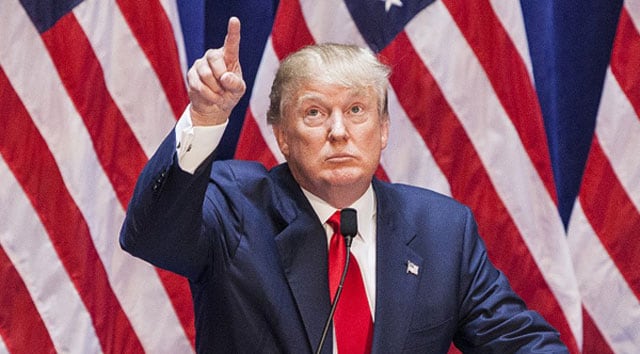 Donald Trump wants Muslims to stay out of the country, at least until the government can “figure out what is going on.” (Photo: CNN)

Presidential hopeful Donald Trump on Monday called for a “total and complete shutdown of Muslims entering the United States” in the name of keeping the country safe, adding to his previous suggestion for surveillance of mosques and establishing a national database for Muslims living in America.

Trump cited a questionable Center for Security Policy poll among Muslims in America indicating that “25% of those polled agreed that violence against Americans here in the United States is justified as a part of the global jihad.” Trump added that more than half of those polled believed Muslim Americans should have the freedom to be governed by Shariah law, which allows for the murder of non-believers by beheading and other “unthinkable acts,” a campaign release stated. Trump also noted that women are especially vulnerable to potential harm by the Muslim community.

“Without looking at the various polling data, it is obvious to anybody the hatred is beyond comprehension,” Trump added. “Where this hatred comes from and why we will have to determine. Until we are able to determine and understand this problem and the dangerous threat it poses, our country cannot be the victims of horrendous attacks by people that believe only in Jihad, and have no sense of reason or respect for human life.”

The billionaire businessman also promised, as he has in the past, that America would be “great again” if he is elected president.

However, Trump, who believes Americans must remain vigilant, didn’t say the ban on Muslims should be a permanent measure, but rather just “until our country’s representatives can figure out what is going on.” Trump also confirmed the ban shouldn’t apply to current Muslims living in America, but only those looking to enter the country now and in the near future.

But some rejected Trumps comments, saying a ban on Muslims violates international law and is unconstitutional.

“Oh, for the love of God,” said Jonathan Turley, a constitutional law expert at George Washington University. “This would not only violate international law, but do so by embracing open discrimination against one religion. It would make the United States a virtual pariah among nations.’’

Trump’s statement, which will likely turn to the center of controversy over an already sensitive subject but appeared to be mostly well-received by many of his supporters, comes less than a week after a deadly shooting at a San Bernardino holiday party left 14 dead and nearly two dozen injured. The couple responsible are believed to be ISIS sympathizers and the horrible act is currently being investigated as terrorism.