A neighbor of the Farook family described Raheel (pictured) as being “more personable, more Americanized” than his brother. (Photo: Facebook)

Documents obtained by the Associated Press Friday show Syed Raheel Farook chose a very different path than his brother, Syed Rizwan Farook, who opened fire at a holiday party in San Bernardino last week, killing 14 and wounding 21. In fact, Raheel is a decorated U.S. Navy veteran who received recognition for his contributions to the war on terror.

The Farook brothers grew up side by side, each experiencing the same challenges and each given the same opportunities, but while Raheel – the elder of the two – chose to join the military and serve his country, Rizwan waged his own war, ultimately carrying out what is now being called an act of terrorism.

In their younger years, being close in age, the brothers often ran with the same crowd, but those who knew them said their differences became increasingly apparent by the end of high school, Reuters reported. Raheem was described as the kind of guy who liked to party and have girlfriends, even girlfriends who weren’t Muslim, while Rizwan was deep-seeded in his religion.

Shakib Ahmed, who attended mosque with the Farooks, said that even though Rizwan was more quiet and reserved, he would lose his temper with his older brother.

“He was nice to everyone else, but he was kind of the dominating type. He would yell at his brother,” Ahmed said.

Usmaan Arshad, who went to high school with the brothers, described Raheel as just a normal guy, while “no one talked to Rizwan.”

After high school, the young men went their separate ways. Raheem joined the Navy and was soon thereafter assigned to the USS Enterprise where he worked as an information system technician for three years. Rizwan completed high school a year early and a short time later began to ditch his blue jeans and polos for robes and grew a beard, as he became increasingly drawn into his religion. 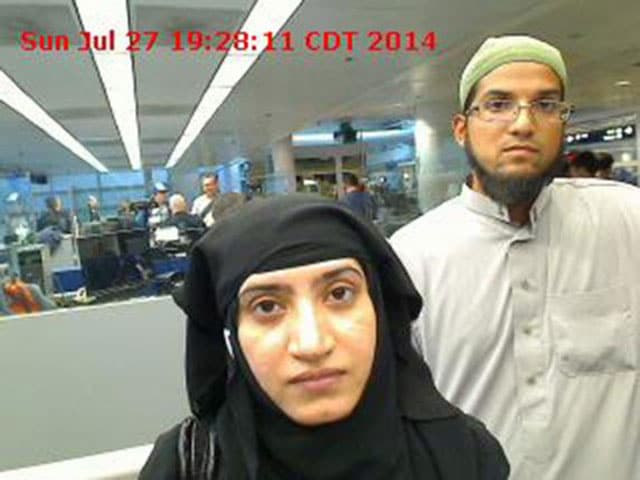 Syed Rizwan Farook and his wife, Tashfeen Malik killed 14 and injured 21 when they opened fire on a holiday party. (Photo: U.S. Customs and Border Protection)

In the years that followed, the tumultuous relationship of the Farooks’ parents reached a breaking point when they divorced in 2006 after nearly 25 years of marriage. Rafia Farook, the boys’ mother, filed for the divorce, citing domestic abuse and her husband’s mental illness, claiming that he threatened suicide on a near-daily basis. Rafia noted that during at least one incident, her son came between her and her husband in an attempt to “save her.”

Currently, Raheel still lives in Southern California, and in the days following the deadly shooting, Reheel and the entire Farook family are left questioning what drove Rizwan to such an act of terror. Raheel is said to be very upset over the incident, according to the family’s attorney, David Chesley.