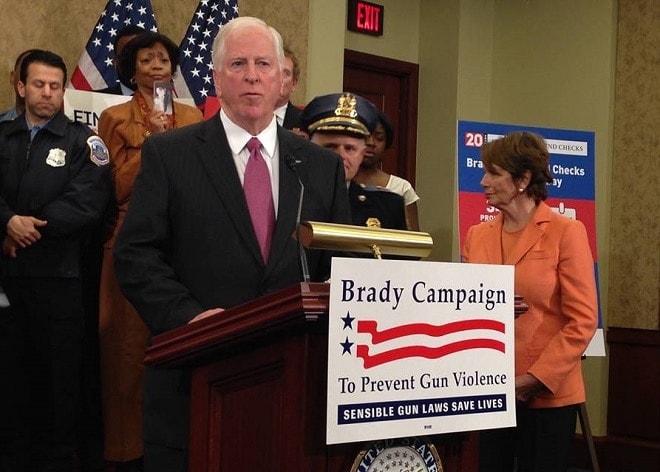 U.S. Rep. Mike Thompson, D-Calif, seen here at a Brady Campaign event, is pushing for a vote on denying guns to those on terror watch lists. (Photo: mikethompson.house.gov)

The U.S. House was the scene of parliamentary shenanigans Tuesday as a block of Democrats urged passage of a measure to prohibit gun sales to those on the no-fly list.

As a procedural move, a number of lawmakers – chiefly from California’s delegation – attempted no less than five times to adjourn the House with Rep. Mike Thompson telling the LA Times there’s no point in the House being in session if it won’t vote on issues Americans care about.

“Since the House won’t take up legislation to prevent the senseless deaths of 30 people killed a day by someone using a gun, I move that the House be adjourned,” Thompson said.

Although the votes to adjourn were unsuccessful, debate on a number of Republican-sponsored bills, including one to tighten the visa waiver program following a terror attack in San Bernardino, California, were delayed as a result of pushing the legislative calendar dangerously closer to a government shutdown.

The proposal at the heart of the controversy is H.R. 1076, New York Republican Rep. Peter King’s Denying Firearms and Explosives to Dangerous Terrorists Act, which would give the Attorney General the power to halt gun sales to an individual as long as there is “reasonable belief” that it could be used in terrorism to include both international and domestic varieties.

Further, the Department of Justice would be allowed the ability to withhold information pertaining to the denial if releasing the data would compromise national security interests.

Introduced in February, the bill gained little traction and has been bogged down in the GOP-controlled Judiciary committee. This week, co-sponsor Thompson filed a rarely-used Motion to Discharge to bypass the committee and bring the bill directly to the floor for a vote after House Republicans voted three times last week to refuse debate on the measure.

Needing 218 votes to do so, it had garnered 143 by late Tuesday. At least 30 Republicans would have to cross the aisle and sign on to the proposal to move it forward.

Democratic Minority Leader Nancy Pelosi argues the measure is needed to address what she terms the “gun violence epidemic” in the country and rises beyond party politics.

A companion Senate measure, led by California Democrats Dianne Feinstein and Barbara Boxer with 23 other party members as co-sponsors, has similarly been sandbagged in committee since February although an amendment to the Obamacare repeal containing the same language was narrowly defeated last week in a 45-54 party line vote.

Thompson is vowing to continue his delaying tactics.