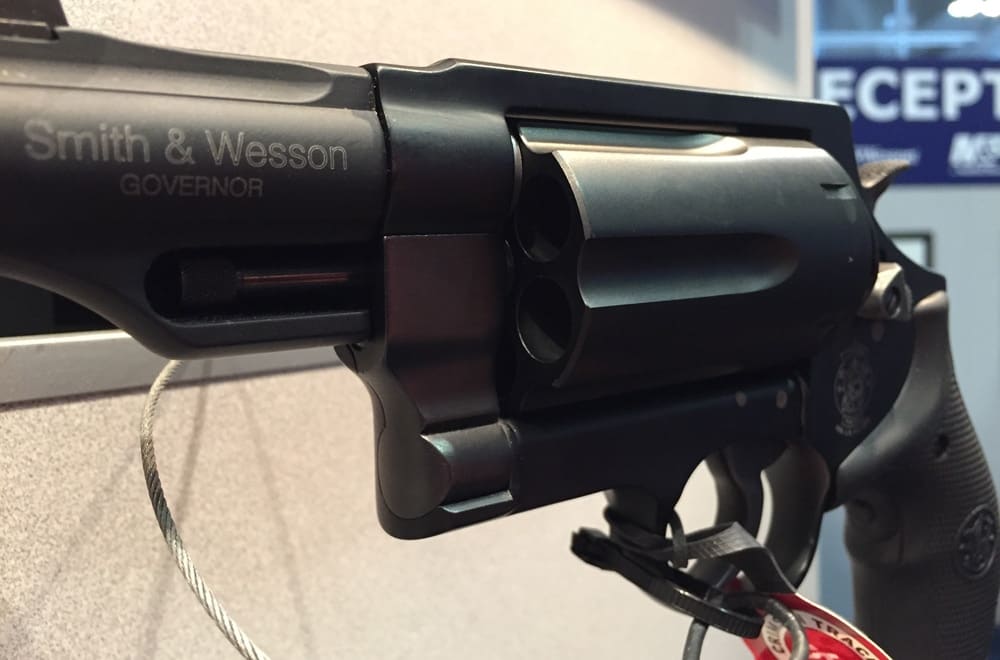 A Smith & Wesson Governor on display at the 2015 NRA show. (Photo: Daniel Terrill)

A predictable pattern for gun sales has emerged following recent high-profile mass shootings: consumers have rushed out to buy guns out of fear of a repeat incident and in response to lawmakers and advocates rallying for gun control.

Investors and financial analysts were curious to know how manager’s at Smith & Wesson Holding Corporation, which held its second quarter conference call on Tuesday, alter marketing and operating efforts during a period of exceptionally strong demand at a time demand is already high.

“Very difficult to tell,” said James Debney, company president and chief executive officer. He added in recent years the company has invested in a plant and outsourcing strategy that allows production to “flex up and down” as demand fluctuates.

“The consumer is out there shopping for firearms perhaps a little bit more strongly than we anticipated, so certainly that’s a factor in our thinking going forward as well,” he said.

“You got to rely a lot on history here. It’s a market that’s difficult to predict, so we do use a lot of history as we input that data into a very robust sales and operations planning process, so that pulls on all functions and the Smith & Wesson organization and a lot of external data as well. And we use that as a base for our guidance.”

Since spurts in sales are caused by both predictable and unpredictable patterns, Smith & Wesson gauges performance on national background check statistics, orders and shipments — just like almost every gun company. However, investors use many of the same predictors, which was exemplified on Monday when stock prices for public gun companies jumped during news of heated political discussion.

Discussing the complexity of the current market, Debney pointed to 2015’s Black Friday shopping, which preceded two separate mass shootings, and how it set a record for most background checks before gun purchases in a single day.

Gun companies can predict an increase in sales for the fall and winter months as consumers prepare for hunting seasons, holiday shopping in November and December, and then the beginning months of the year kick off trade show season, a time when retailers browse products and distributors place orders.

Since 2013, a year when gun sales had an estimated $37.6 billion economic impact in the U.S., Smith & Wesson has been refining specific brands, like the Military & Police series of pistols and rifles, as well as laying track to generate revenue from gun accessories. The company acquired Battenfeld Technologies, which owns a host of shooting and outdoor brands, in December 2014.

Comparatively, other gun companies have reported positive earnings and profits this year even before the horrific, high-profile incidents that occurred in the past few weeks.