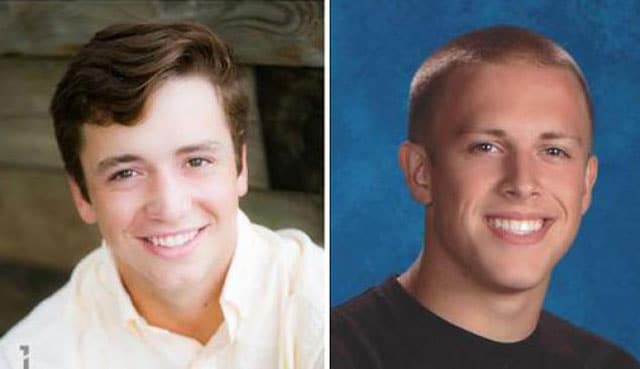 John Price (left) and Jacob Flynn (right) were killed in the crash.

Authorities are looking into the possibility that a game of “Nerf Wars” may have played a factor in a Friday afternoon car accident in Lakeville, Minnesota, that left two teens dead and two other teens injured.

Jake Flynn, 17, and Johnny Price, 18, both of whom were described as star athletes at Lakeville South High School, died after they were thrown from the pickup truck. Mason Kohlbeck, 18, was treated and released after he was found wandering around, confused near the site of the crash. Alexander Hughes, 17, who was driving the truck, remains hospitalized in critical condition.

Sheriff Tim Leslie said rumors abounded over the weekend that the teens were engaged in a game of “Nerf Wars” when Hughes veered to the right then overcorrected, causing the pickup truck to flip over and careen in what Leslie described as “a barrel roll.” Leslie noted the truck was completely destroyed.

Investigators will talk with Hughes once his condition improves to determine what exactly happen and prove – or displace – the rumors that the game was involved.