Suspect gets a gut shot after following nightclub worker home 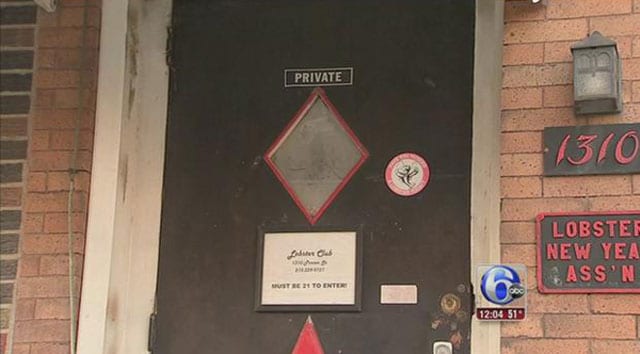 It’s unknown if the group of men were acquainted with any of the partygoers. (Photo: ABC)

A 41-year-old man is in the hospital recovering from a gunshot wound after a confrontation with a nightclub employee in South Philadelphia Sunday night turned violent and the employee defended himself against his attacker.

Authorities say the incident began around 10:30 p.m. when a group of guys attempted to enter the Lobster Club. The club, however, was hosting a private party and the men were turned away by the club employee. Philadelphia Police Capt. Drew Techner said the group was made up of approximately five men, a local ABC affiliate reported.

Some time later, after the party came to an end, the employee, who has not been named, closed up the club and left the building, but the group of guys which were previously turned away apparently were waiting for the employee and followed him home.

Once at his residence, the group confronted the man and a fight ensued between the five guys and the one employee. Once the confrontation turned physical though, the employee fired a single shot, striking one of the suspects in the stomach and bringing the fight to an end.

That suspect, whose name has not yet been released, went to the hospital where he was last listed in stable condition.

The club employee was taken into police custody for questioning but later released. Other witnesses were also questioned.

Authorities confirmed the man has a valid license to carry a concealed gun. Police said he was waiting at the scene of the shooting for them when they arrived and that he has cooperated fully with authorities. No charges have been filed against the employee at this time.

It’s unclear if the club worker was injured during the altercation.

The nightclub has surveillance cameras installed outside of the building, but it’s unsure if they captured any images that would assist authorities in their investigation.