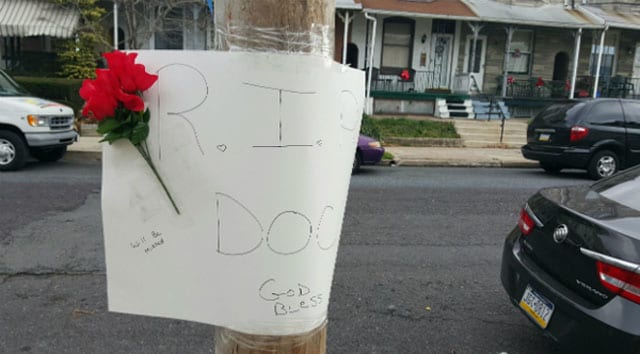 A memorial was erected where the teen was killed while attempting to rob a man. (Photo: WFMZ)

No charges will be filed against a 23-year-old victim who fatally shot a 17-year-old during an attempted robbery in Reading, Pennsylvania, last week, the district attorney announced Monday.

“He had very, very little choice but to use deadly force in this situation,” said Berks County District Attorney John T. Adams when he announced the decision.

The intended target, whose name has not been released, was walking around 9 p.m. when three teens jumped him from behind and proceeded to punch and kick him while he was on the ground, but what the teens would soon discover was that their intended target was carrying a gun.

Eventually, two of the teens held the man down, while the third began rummaging through the man’s pockets. It was at this point the man realized the suspect on top of him was also armed with a silver revolver. As soon as the man had the opportunity, he pulled his own gun and fired a shot into the air. This caused the two teens who were previously holding him down to flee, but the third teen continued to struggle with the man. Fearing for his own safety, the man fired three additional shots, this time striking his attacker all three times.

Adams noted that the victim, who has a concealed carry license, stayed on the scene until authorities arrived and has been fully cooperating with the police. Witnesses also corroborated the man’s account of what transpired.

Witnesses helped to identify the remaining suspects, who are Jaylen Jefferson, 17, and Kristan Diaz-Cruz, 17. Both are being charged as adults for robbery, conspiracy, aggravated assault and related offenses. They are each being held on a $100,000 bail. Authorities also arrested a third suspect, Tejona Williams, 18, who they say helped plan the robbery and supply the gun. Authorities say the four teens planned the robbery together after school.

“We have way too much violence involving our youth and it needs to stop,” Adams said. “Most of these people are too young to even legally have a gun so we need to focus on getting these firearms out of their hands.”