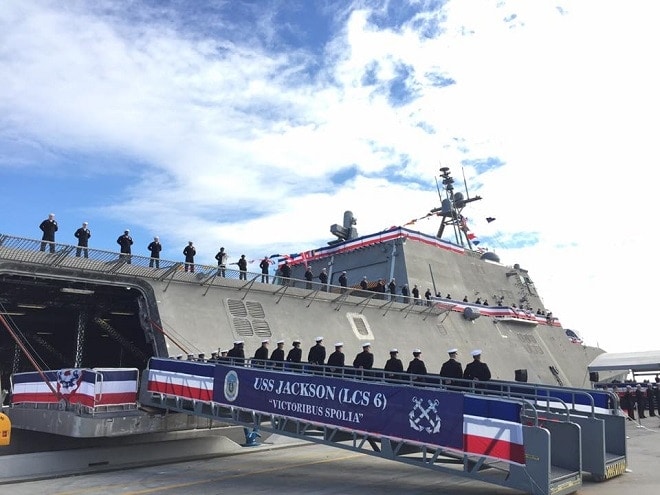 Some argue the newest warship in the Navy, named for Mississippi’s capital, carries a moniker with bad history. (Photo: USS Jackson Commissioning)

Commissioned this week in Mississippi and named for both the state capital and by extension the seventh President, Native American and NAACP leaders are fuming.

USS Jackson (LCS-6) is an Independence-class littoral combat ship that was placed in service in a ceremony in Gulfport on Saturday. The first ship to bear the name of the Magnolia State’s capital, eight other ships in the U.S. Navy and Revenue Cutter Service throughout history have bore similar monikers including three specifically for the noted American general and 19th Century President Andrew Jackson.

Notably the city of Jackson, which was known back in the 18th Century as LeFleur’s Bluff, was also named after then-General and later President Jackson in 1821.

And the choice of name for a warship now has some critical.

Jackson, known to history for his military role during the war against the Creek Indians in Alabama and later during his tenure as President for the Indian Removal Act which forces many friendly tribes from their traditional homes in the Southeast– including Mississippi– to unfamiliar land in Oklahoma, has detractors among Native Americans.

“For our government to hold Andrew Jackson up to some reverence today, given our nation’s better appreciation of American history today than generations ago, is very troubling,” said Chuck Hoskin Jr., secretary of state for the Cherokee Nation. “For the Cherokee people, Andrew Jackson represents the period of Indian removal,” a legacy of “trauma” and the “brutal act” of evicting people from their lands.

Secretary of the Navy Ray Mabus, a former naval officer and the 59th Governor of Mississippi is responsible for naming new vessels on the Navy List and has drawn fire for his choice of ship names in the past including one for former U.S. Rep. Gabby Giffords and labor activist Cesar Chavez.