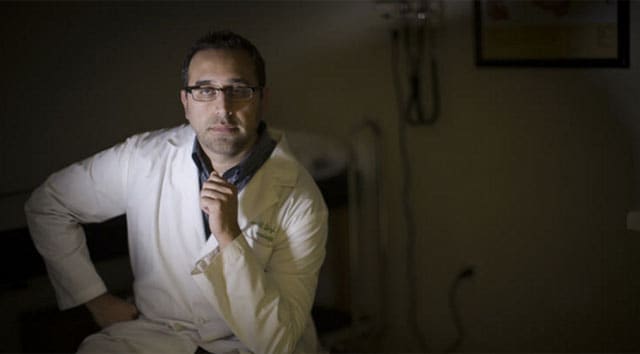 When Faisal Qazi started the fundraiser, he wasn’t even aware at that point that the San Bernardino killers were Muslim. (Photo: Gina Ferazzi / Los Angeles Times)

Following what is now being labeled an act of terrorism, Muslim communities across America have rallied together to give back in a big way to the victims of the San Bernardino shooting.

Faisal Qazi, a 41-year-old neurologist out of Pomona who also happens to be a Muslim, didn’t initially know that the attackers responsible for the horrific shooting were also Muslim. In an interview with the Los Angeles Times, Qazi explained all he knew at the time was that his fellow Americans, his fellow community members needed help and he was obligated to do whatever he could.

Qazi launched a fundraiser, first through his health nonprofit, then through the crowd-sourced fundraising group LaunchGood. Initially, the goal was to raise $20,000, but four days into the fundraiser, which has now become the largest ever crowd-funded financial venture by American Muslims, more than $100,000 in donations poured in from over 1,000 donors. A week into the fundraiser, more than $170,000 has now been collected, and the vast majority of contributions came from Muslims, just like Qazi and the couple who carried out the terroristic act.

“The American Muslim community has had extensive and intense conversations in the last decade about our role in society,” Qazi explained. “What you’re seeing is the coming of a new generation of American Muslims being emotionally and physically invested in whatever transpires in society.”

Chris Blauvelt, who is Muslim, started the LaunchGood website two years ago. The Detroit resident, who converted to Islam just three months before the 9/11 attacks, echoed a similar sentiment as that shared by Qazi.

“After 9/11, we had a rude awakening,” Blauvelt explained. “We realized we had to do more than get good jobs as doctors and engineers and buy houses in the suburbs. We have to give back to the communities we live in, the American community.”

And LaunchGood is one way Blauvlet has managed to do just that. So far, the website has raised $5 million for nearly 500 projects in 39 countries, including helping to rebuild churches in Charleston that were burned down earlier this year. And of those donations, approximately 80 percent have come from Muslim Americans.

But Blauvet said the San Bernardino effort has far surpassed anything they’ve done in the past, with donations at one point coming in at an average rate of $1,000 per hour.

Marya Ayloush, a 20-year-old Santa Monica Community College student noted what compelled her to give.

“This is an actual, tangible action we can do to show non-Muslims that we have your back,” Ayloush said. “In every situation where the terrorist happens to be a Muslim, every person, whether they admit it or not, is afraid they’ll be lumped in with these guys.”

Ayloush added that the victims of last week’s shooting were neighbors in a community sense and “cannot go unassisted.”

Shaykh Mohammed Faqih, a scholar with the Islamic Institute of Orange County, also noted that things are different since 9/11.

“Since 9/11, we’ve felt we need to come out of our cocoons,” Faqih said. “We’re as American as anyone else … but if society is not feeling it, it means I’m not doing enough.”

The county of San Bernardino, along with the United Way will disburse the donations between the families of the victims, which can, in turn, be used for funeral expenses or other needs.