Connecticut governor banning sale of guns to those on watch list 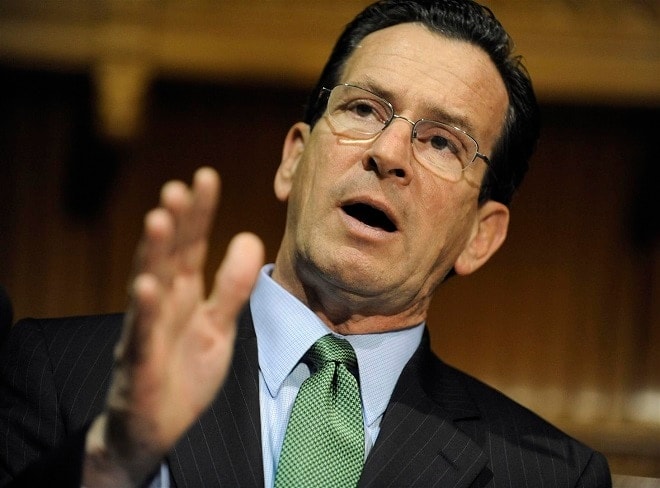 Gov. Dannel P. Malloy is moving forward with a plan for Connecticut to refuse gun sales to those in the state on the no-fly list. (AP Photo/Jessica Hill)

Connecticut Gov. Dannel P. Malloy announced Thursday he plans to issue an executive order banning the sale of firearms in the state to those on government watch lists.

Malloy, long a strident advocate on gun control issues, feels he needs to take unilateral action to implement the prohibition over concerns that potential terrorists may legally purchase guns.

“I am taking this common sense step with this executive order simply because it’s the right thing to do.  It’s the smart thing to do.  If you can’t fly without clearing government watch lists, you shouldn’t be able to buy a gun,” said Malloy in a statement. “Why anyone would stand idly by and knowingly allow those on government watch lists to purchase guns is truly unbelievable.”

A federal ban of the same sort has been a hot button issue on Capitol Hill in recent weeks following a perceived terror attack in San Bernardino, California that claimed the lives of 14 at a holiday party.

Although the husband and wife team in that shooting are not believed to have been on a watch list and the four guns they used were purchased legally in California, a state with among the strongest gun laws in the country, the mass killing has provided impetus for a move to turn the so-called “>no fly list” into a database of individuals who cannot purchase firearms.

Republican lawmakers and gun rights groups argue the watch list is a bad tool for an arbitrary gun prohibition list as it contains as many as 700,000 names and has little redress. U.S. Rep John Lewis of Georgia, the late Sen. Ted Kennedy, South African President Nelson Mandela and even singer Cat Stevens were at one time or another all members of the no-fly list.

“Since Congress so far has failed to act, we will,” Governor Malloy said. “I have been working directly with federal officials and we are working to use the watch lists for these purposes. It is my responsibility as the Governor of Connecticut to protect the citizens of our state from threats. We’re working to do just that.”

Further, Malloy urged lawmakers in Washington to follow his lead on a national level.

“Connecticut’s delegation has been outspoken about these issues, and Congress must act and pass the Denying Firearms and Explosives to Dangerous Terrorists Act of 2015. In the interim, other states should follow Connecticut’s lead. We should all use this moment to act,” said Malloy.

The editorial boards of the Boston Globe, LA Times and Washington Post have all denounced the use of the list to ban gun sales due to fundamental flaws with the secretive nature of the database.

Larry Keane with the National Shooting Sports Foundation explained last month that, “[W]e all support the goal of preventing terrorist acts. But terrorist and criminals should be on law enforcement wanted lists or charged with appropriate crimes.  These actions would effectively prohibit dangerous individuals from purchasing firearms.

“It is, quite simply, unacceptable to deny Americans their Second Amendment rights without due process because their name was placed on an error-prone secret government list for which there is no underlying statutory authority.”