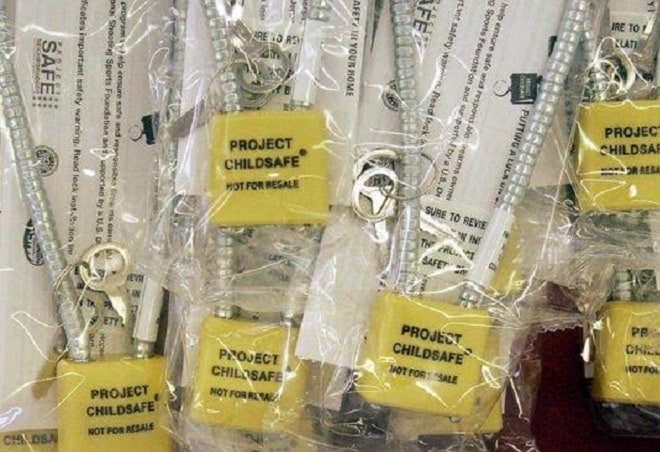 Project Childsafe, backed by the NSSF with the help of gun industry partners, has distributed millions of free gun locks in the past 18 years. (Photo: NSSF)

A collection of 22 anti-gun groups are delivering signatures Thursday calling for a two-year $2.4 million federal grant to fund a free gun lock program be canceled.

The grant, awarded by the Justice Department in September, is to fund firearm safety education messaging and free gun locks through National Shooting Sports Foundation’s long-running Project ChildSafe program to communities throughout the country. Key tenets of the program, started in 1997, include responsible firearm storage to help reduce firearm accidents, theft and misuse.

However, an alliance of gun control organizations to include the Coalition to Stop Gun Violence, Stop Handgun Violence, MomsRising and the Newtown Action Alliance feel the money could be better spent by programs they advocate rather than by the NSSF, which is the trade association for the gun industry.

They contend the trade group’s lobbying on behalf of relaxed gun laws and opposition to expanding background checks and restrictions shouldn’t be rewarded with federal funds and are delivering a petition to the DOJ to recall the grant.

“It seems we can’t go a day in this country without a mass shooting occurring,” said Po Murray, Chairman of the Newtown Action Alliance, in an email to Guns.com. “It is outrageous that, in this climate of violence, Congress would authorize the Obama Administration to give taxpayer money to a lobby that has fought against any and all attempts to prevent these tragedies We will continue to follow the money trail to make sure taxpayer dollars are not being granted to the gun lobby for other programs.”

The gun control groups argue that a better use of the money would be to fund projects such as Ceasefire, which uses former gang members in outreach services as “violence interrupters.”

CeaseFire and those other initiatives based on its model have proved controversial. One such program in Baltimore– funded by a DOJ grant– was partially suspended earlier this year following the discovery drugs and at least seven guns in their offices.

In Chicago, PBS’s Frontline noted that at least six outreach workers and interrupters CeaseFire had returned to crime, citing that the group had “at times a tense relationship with Chicago police officers, who were wary of collaborating closely with people they’d arrested in the past.”

The NSSF characterized the opposition to their program, which had distributed over 37 million free gun safety kits, as dangerous rhetoric from groups who lacked a better idea.

“Sadly, but not surprisingly, these gun control groups are placing gun control politics over safety,” Lawrence Keane, senior vice president and general counsel of the National Shooting Sports Foundation, explained to Guns.com. “NSSF earned the grant fair and square through an independent, peer-review process that determined we were best suited to carry out the government’s intended firearm safety program.”

Keane downplayed assertions by Murray and others that the trade group’s politics on guns should bar the group from funding on Childsafe.

“The fact that NSSF exercises its first amendment rights and lobbies against the administration’s policies with which we disagree only means we have a different view of how to respond to firearm safety and gun violence issues,” said Keane. “These groups had an opportunity to apply for the grant and did not because they have no legitimate safety program.”