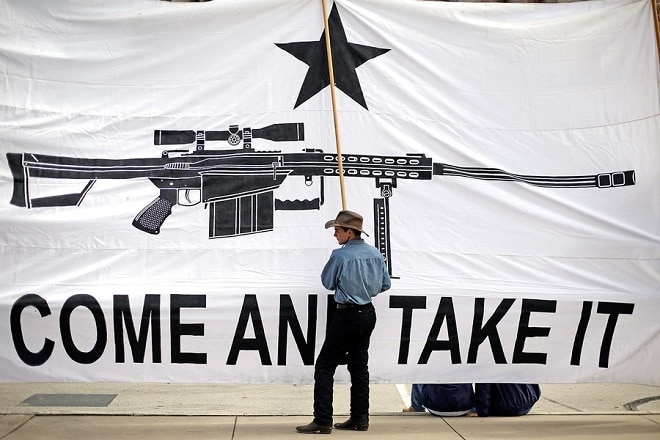 Pro-gun advocates in Austin are staging an open carry event followed up by a simulated mass shooting to protest gun free zones, now under debate on campuses across the state. (Photo: Eric Gay/AP)

Second Amendment activists are putting on an “Open Carry walk and Crisis Performance Event” near the campus of the University of Texas and not everyone is happy about it.

The event, according to organizers from Come And Take It Texas and DontComply.com, is meant to put pressure on politicians and anti-gun groups to help ease and eliminate gun free zones, a subject of fierce debate on UTs campus.

“These target rich environments are letting our children be murdered by evil people. Now is the time to stand up, take a walk, and put pressure on politicians to ban Gun Free Zones,” reads a statement by event organizers seeking both crisis actors for the performance and attendees.

Matthew Short, a spokesman for the gun rights groups, explained to the Austin American-Statesman the performance would be a simulated mass shooting involving stage blood, gun noises broadcast through bullhorns and role-players serving as victims, active shooters and rescuers armed with cardboard guns.

Originally planned to take place in publicly accessible areas on campus, the event will likely be staged on Guadalupe Street, adjacent to campus after push back from UT officials involved public warnings of potential criminal trespass charges.

“We will move forward with the event on the adjacent public land using UT as the backdrop,” said Come And Take It Texas founder Murdoch Pizgatti.

After a series of compromises, a measure to allow licensed concealed handgun permit holders to carry their guns on public college campuses passed the state legislature earlier this year and was signed by Gov. Greg Abbott (R) into law, to take effect next August.

As the law allows university presidents to carve out some areas that will remain gun free zones, UT President Gregory Fenves earlier this year announced a 19-member working group to recommend both safe firearms storage guidelines and map out enduring gun free zones for the campus.

Now, some 800 staff in the expansive UT system have added their names to a public document vowing not to teach with guns in their classes while some have joined with students and parents to form Gun-Free UT, which advocates all buildings on campus be designated as gun-free zones and ultimately to repeal the new campus carry law altogether

Word of the planned fake shooting brought quick condemnation from anti-gun groups and those opposed to campus carry with Moms Demand Action branding participants as “extremists.”

However, some pro-gun groups disagree with the tactic as well.

Open Carry Texas slammed the demonstration on Wednesday saying, “These kinds of attention seeking escapades do nothing to bridge the gap between gun owners and the uneducated masses trying to understand why we fight so hard to protect these fundamental rights.”

School officials stand by their choice to refuse space to the gun rights group for the rally, despite allowing those on the other side of the debate – such as Gun Free UT – a forum for protesting against campus carry.

“Many groups seek to use the university’s facilities each year and they are all treated equally and are turned away,” said UT Austin spokesperson J.B. Bird. “For example, we have not allowed the Westboro Baptist Church to protest on campus and have not allowed labor groups to protest on campus. We have told outside sporting groups that they may not use our sporting facilities.”

The open carry event is scheduled for Saturday at noon with the theatrical performance starting at 2:30 p.m.

As a counter, a group will stage a “mass farting” at the same time and location while local members of Moms Demand Action, Texas Gun Sense, and Gun-Free UT are hosting an “Orange Walk” on Sunday to commemorate the third anniversary of the Sandy Hook tragedy remember victims and survivors of gun violence.