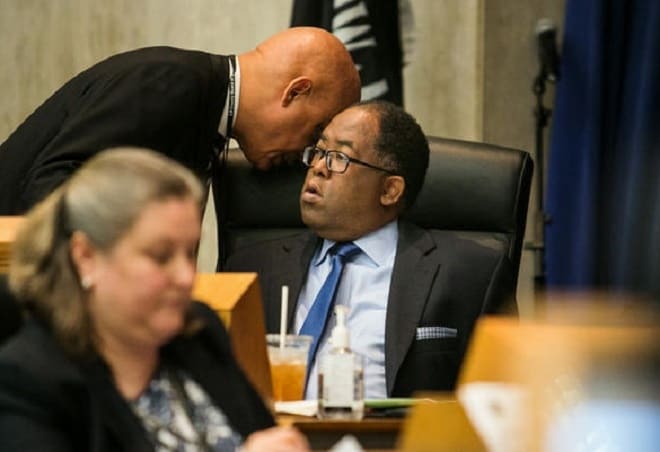 Among the list of possible actions to be proposed by Los Angeles County include mandatory insurance for gun owners and more controls on sale or possession of semiautomatic guns.

Supervisor Mark Ridley-Thomas said Tuesday that his move is prompted in part by the recent tragedy in nearby San Bernardino that left 14 dead coupled with an apparent green-light given to local gun control efforts after the U.S. Supreme Court’s refusal on Monday to hear a challenge to a local ordinance in Highland Park, Illinois, banning “assault weapons” and high-capacity magazines.

“Much more needs to be done in the face of a deeply troubling and recurring pattern of mass shootings,” said Ridley-Thomas, often mentioned as a potential challenger to LA Mayor Eric Garcetti in 2017 who signed a measure earlier this year banning possession of grandfathered magazines capable of holding more than 10 rounds.

“Now is the time to act,” Ridley-Thomas said.

The proposal would seek to engage the county’s counsel, sheriff, district attorney, health department heads and others with marching orders to take 30 days and work out a list of recommendations to be acted on by the board.

Ridley-Thomas advised the options could include mandating insurance for gun owners to offset potential “tragic outcomes” in a shooting, taxing ammunition, stepping up gun buy-back programs and requiring additional background checks on guns sold in the county and more regulations on semi-automatic firearms.

It is not just in the L.A. area that lawmakers are seeking more local gun control.

City leaders in Oakland last week debuted a quartet of proposed new laws moving to prohibit possession of any magazine capable of holding more than 10 rounds and lock up guns left in vehicles.

Meanwhile, Lt. Gov. Gavin Newsom, himself a candidate to replace Jerry Brown for governor in 2018, has proposed a sweeping voter initiative that some call a declaration of war on law-abiding gun owners and Second Amendment rights. The five point plan includes an end to grandfathering of magazines capable of holding more than 10 rounds, relinquishment of weapons by those prohibited by the state from legal possession, mandatory reporting of lost or stolen guns and background checks prior to all ammunition sales – a first for any state.

The Los Angeles County board is expected to vote on moving forward with the measure at the next meeting on Dec. 15.