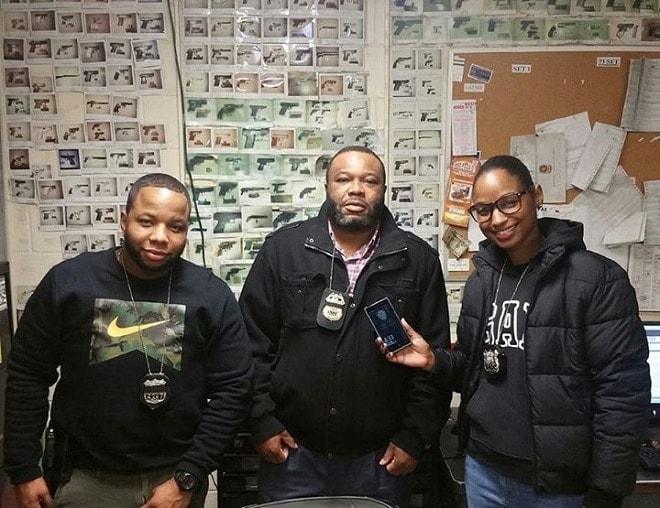 Directed by a new gunfire detection system arrayed in the area, officers were led to the scene of the gunshots through their mobile devices. (Photo: NYPD)

New York Police responded to a cue from a ShotSpotter alert of gunfire in a Brooklyn neighborhood and soon had three in custody on charges of criminal possession of a weapon.

According to a statement from the department, Sergeant Lewis and Police Officers Allen, George and Lawrence were dispatched to a building in the 400 block of Saratoga Avenue after the city’s new gun fire detection system reported shots in the area. The systems uses strategically located microphones and sensors to detect the sound of muzzle blasts through normal city noises and triangulate them back to the source.

Once on scene as directed by the smart phone app on their department-issued mobile devices, the officers found eight shell casings on the rooftop and were informed that a building resident had an outstanding arrest warrant. On knocking at the door of the residence, officers located not only the individual with the outstanding warrant but also observed bullets on a table by the door.

Further investigation after obtaining a search warrant for the premises turned up two illegal semi-automatic handguns and led to the arrest of a woman and two men.

As reported by the New York Times earlier this year, ShotSpotter sensors have been set up as part of a pilot program in 7 precincts in the Bronx and 10 in Brooklyn, covering a total area of 15 square miles, where there have been a high number of shootings.

The system is in use in Boston, Detroit, Rochester, and elsewhere.