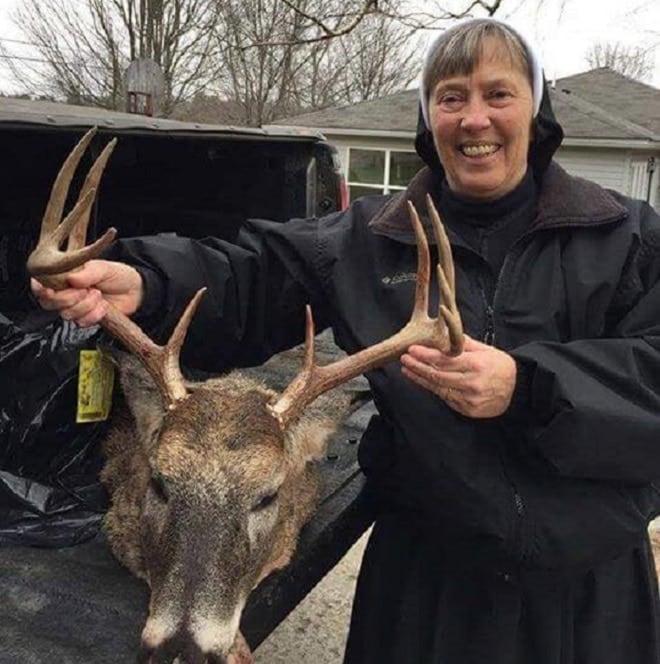 Sister John Paul Bauer was understandably proud of her harvest, which she shared with local families. (Photo: Facebook)

A Pennsylvania Navy-vet and current nun who teaches at a catholic school was blasted on social media when she shared an image of her harvest last week.

Benedictine Sister John Paul Bauer of St. Mary’s, a rural area in Erie County that is home to Straub Brewery and the first Benedictine convent in the United States, has been hunting for five years and has successfully bagged both bear and deer in recent seasons. With that, the educator who teaches at Elk County Catholic High School didn’t think twice about sharing a photo of her recent harvest, that of an impressive mature buck with a 16-inch spread.

The image made it to the Diocese’s Facebook page where it received 2.1 million views and 16,585 shares but was pulled after a series of negative comments.

Welsh said they posted the image to give the parish insight into the lives and hobbies of some of their members and never expected a backlash.

“We thought it was an interesting way to show that sisters have different interests and talents along with their vocation,” Welsh said Monday.

As for Bauer, she contends that in her area, which is in the center of Pennsylvania’s elk country, hunting is quite popular.

“In St. Mary’s, this is what you do,” she told Erie News Now. “You go hunting. Everybody goes hunting. The coach, myself, the students,” she said.

Taken on Nov. 30, the nun advised she sat quietly in her tree stand near Weedville for three hours praying over her rosary when first a doe– which she passed up– then the buck appeared. She harvested the animal efficiently with a single shot.

Bauer, who learned marksmanship in the Navy and took her vows in 2002 after working as a Veterans Affairs psychologist, shared her harvest with local families and her photo, complete with legal deer tags affixed, remains on several area hunting boards.

The Commonwealth has one of the largest populations of deer hunters in the country, with over 750,000 taking the field each season and is currently mulling allowing an expansion to allow for the use of semi-automatics for the first time since 1907.