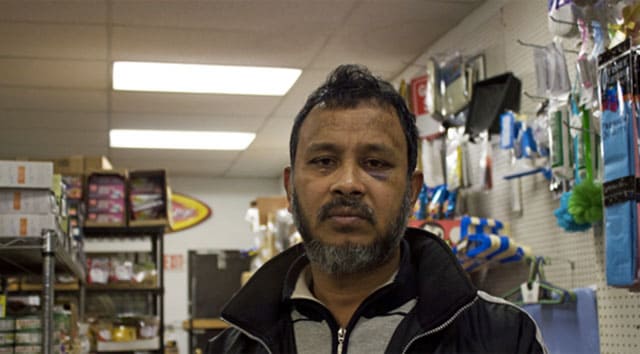 Parker Haque said he and his wife, who have five children, chose the area to live because of its reputation for good schools and safety. (Photo: Jeanmarie Evelly / DNA Info)

A brutal attack against a New York City shop owner last weekend left the 52-year-old man battered, bruised and bleeding and now police are investigating the incident as a possible hate crime.

Parker Haque has owned Fatima Food Mart in the Big Apple’s Astoria neighborhood for 16 years, but said he has never experienced anything like what he did on the afternoon of Dec. 5.

Hague said a man, who was later identified as 55-year-old Piro Kolvani, walked into the store around 1 p.m. and began to thumb through magazines. Eventually, he picked up a copy of the New York Post, which featured a photo of the San Bernardino shooters.

“He looks at it two or three minutes, then comes to me and he said, ‘Everything free in this store?’” Hague told DNA Info. “And I said, ‘What? No.’”

Kolvani continued to wander through the store, picking up various items and asking Haque if they were free. Haque came out from behind the counter when Kolvani picked up a full pot of coffee because he said he feared Kolvani was going to break it.

Finally, Haque asked Kolvani what he wanted, what he was looking for, but his questions were ignored as Kolvani continued to “browse.” After picking up several more items, Kolvani – without provocation – punched Haque in the face, causing him to fall over into a display case.

According to Haque, as Kolvani kept punching him, he said something along the lines of “I kill Muslims.” Haque said he was afraid he was going to die as he reached for the phone to call for help, but was not able.

“I was screaming and crying, I say, ‘Can anybody help me?'” Haque recalled.

After what Haque thinks was about seven or eight minutes, Kolvani started to walk out of the store, but Haque, beaten and battered, was not ready to let him go. Haque grabbed the back of his jacket, as he continued screaming for help. Moments later, a man who regularly patronized the store walked in, saw what was occurring and detained Kolvani, as another passerby called the police.

Haque was taken to the hospital where he was treated and released. Kolvani now faces a misdemeanor assault charge, but authorities say those charges could be upgraded, as the incident is being examined as a possible hate crime.

Haque, who is from Bangladesh but has lived in the United States for nearly 30 years, said other than being robbed once a few years ago, he’s never had any problems in Astoria, which he called “the best.”

But Sadyia Khalique, director of operations for the New York chapter of the Council on American-Islamic Relations, said incidents like these are becoming increasingly common.

“The lives of American Muslims have been placed in danger by the rising anti-Muslim hysteria in our nation and by the inflammatory rhetoric used by a number of national public figures,” Khalique said.

Haque told reporters with local media the incident left him concerned for his safety as well as the safety of his family.

Haque said the color of a person’s skin or their nationality shouldn’t matter.

“We are in America,” he said. “Everybody came from somewhere.”