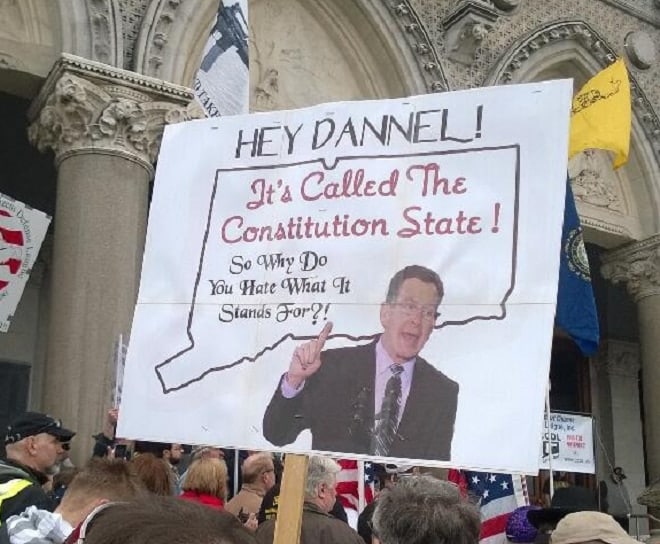 Pro-Second Amendment activists in Connecticut are gathering steam to oppose a plan by Gov. Malloy to apply the no-fly list to gun sales and ownership in the state. (Photo: @GallSueJoe/Twitter)

Gun rights groups, questioning the legality of the use federal terror watch lists by Connecticut Gov. Dannel Malloy to prevent gun sales, are promising legal action should it move forward.

On Thursday, Malloy promised unilateral action to implement the prohibition over concerns that potential terrorists may legally purchase guns and announced he would sign an executive order banning sales to individuals on the list inside the state. Those denied would be allowed to appeal to the state Board of Firearms Permit Examiners and finally to Superior Court.

“If you can’t fly without clearing government watch lists, you shouldn’t be able to buy a gun,” said Malloy.

While officials in Connecticut do not have access to the federal list at this time, they are in the process of obtaining it “through channels.” Should the state be granted access, those currently with gun permits found on the list would have their permits revoked, effectively eliminating their right to possess certain firearms in the state, as reported by the Harford Courant.

However, one national gun rights group warned, if the list is given to Malloy, that act alone would trigger a quick lawsuit against the federal government.

“He should never get federal government approval to use the no fly list for this purpose. The Second Amendment Foundation will sue the Obama Administration if they allow it,” Alan Gottlieb, SAF founder, told Guns.com late Thursday.

Local pro-gun groups weighed in on the issue as well, warning action against the governor, over what they argue would be a clear “due process” violation of the 14th Amendment to the U.S. Constitution.

“Governor Malloy is planning to take what is in our view unconstitutional executive action that would prohibit firearms purchases and seize firearms of individuals who have not been indicted or convicted for any crime,” said Connecticut Citizens Defense League President Scott Wilson in a statement. “While we are all concerned about terrorism, this approach is very un-American and shameful.”

Painting Malloy’s proposal as a pattern of abuse, Wilson pulled the trigger on threat of litigation by saying, “CCDL will not rule out any legal course of action to halt this imminent executive action.”

Further, they may have a case as outlined by Rachel Baird, an area attorney familiar with gun rights.

“The disregard of due process in placing people on the no-fly list without a notice or an opportunity to be heard and then using that status to deny constitutional rights is the most obvious constitutional violation inherent in the governor’s announcement,” Baird told the Connecticut Law Tribune. “When people ask why Second Amendment advocates and firearms owners oppose each and every infringement of their right to bear arms, it is for this reason — [they] know that it is not the intent of officials like Governor Malloy to protect citizens, it is their intent to disarm the citizenry, law-abiding or not.”