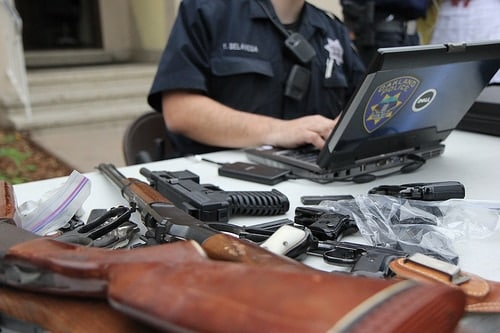 Less than a week after a mass shooting in Southern California early this month, lawmakers in the north of the state introduced measures to regulate firearms and ban high-capacity magazines.

The National Rifle Association on Friday called on its supporters to oppose several ordinances to be discussed at the Oakland City Council’s next meeting Tuesday.

The ordinances would ban concealable firearms left unsecured, as well as long guns and ammunition in unattended vehicles. Firearms, magazines or ammunition left unsecured in cars on the city street would be treated as a misdemeanor punishable by up to six months in jail and a $1,000 fine.

Gun owners would be required to keep their firearms secured either with a trigger lock or a lock box while stored in their home. Concealed carry licensees would also be required to secure firearms in automobiles.

The NRA argues limiting the amount of ammunition a person can carry  will do little to reduce violent crime and pointed to a federal 10-year ban introduced by Sen. Dianne Feinstein in 1994.

No longer in effect, that ban was “a violation of a person’s right to possess and carry, including ‘all instruments that constitute bearable arms’ as decided inDistrict of Columbia v. Heller (2008),” the NRA said in an alert emailed to its members.

Proponents of the magazine ban argue that a ban on high-capacity magazines reduce the amount of damage criminals can inflict. To that end, the state of California requires rifles sold in the state be modified with a release mechanism – commonly referred to as a bullet button – that requires a tool to detach a magazine.

The gun group also opposed the city’s proposed ordinance on trigger locks, arguing the devices can fail and aren’t a substitute for safe firearms handling practices.

“Reliance on devices, rather than safety rules, can instill a false sense of security that can lead to problems when a device-less firearm is encountered,” the NRA said.

The Oakland ordinances follow similar measures in other cities like nearby San Francisco, Sunnyvale and Los Angeles, in a state with already the strongest gun laws in the country.

“There are mass shootings almost daily in our country and we need to do all we can do to make it harder to access large volumes of ammunition,” said Councilman Dan Kalb. “No one really needs a large capacity magazine. That’s why we need to ban them.”