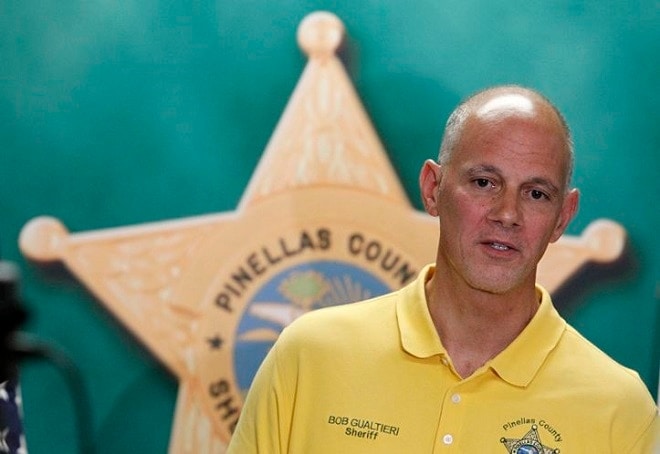 “At a minimum, they’re going to be thrown down on the ground with a gun pointed at them, or worse,” says Pinellas County Sheriff Bob Gualtieri about people that open carry. (Photo: James Borchuck/Tampa Bay Times)

Despite the Florida Police Chiefs Association announcing support for open carry legislation tracking in the state legislature this week, some law enforcement leaders are warning the proposal is flawed and are sticking to their guns to oppose the measure.

For instance, he said, if an officer arrives at the scene of a crime and sees someone with a weapon, “At a minimum, they’re going to be thrown down on the ground with a gun pointed at them — or worse.”

In addition, if good guy with a gun walks into, say, a bank during an armed robbery, Gualtieri added, “he’s going to take one in the chest because he’s a threat.”

The legislation the good sheriff is so fired up about is a twin set of bills, SB 300/HB 163 would allow the state’s 1.4 million concealed carry permit holders to openly carry a firearm. Despite some of the most pro-gun laws in the country, Florida is but one of five states in the nation to prohibit the open carry of firearms altogether.

A number of amendments have either been made to or proposed for the legislation, including a provision that a person who displays their gun in an “angry or threatening manner, not in necessary self-defense” not be covered under the law, that law enforcement officers must have reasonable suspicion to stop someone open carrying, as well as a mandate to use a holster.

These amendments earned the support of the Florida Police Chiefs Association in a 15-7 vote this week, but the Florida Sheriffs Association, who came out with 47 of 67 member sheriffs opposing the bills in October, remain unimpressed.

The comments by Gualtieri, who is head of the FSA’s legislative committee, brought quick editorial from Florida-based media.

“The sheriff’s statements constitute official sanction for his deputies to use excessive force — or even deadly force — on gun owners,” wrote the Sarasota Herald-Tribune‘s Lee Williams on Friday. “And quite frankly, that should scare the hell out of everyone who lives in Pinellas County, regardless of whether they own or carry a gun.”

“Open and concealed carry works in 45 states, it’s an insult to Florida law enforcement to believe that they are incapable of telling the good guys from violent criminals,” reads a statement from Florida Carry emailed to Guns.com. “Bob Gualtieri is a bully with a badge who would be better suited to be a street cop in Iran than a Sheriff in Florida.”

Both the Senate and House open carry bills have passed a number of subcommittee votes and are now in their respective judiciary committees for further hearings.