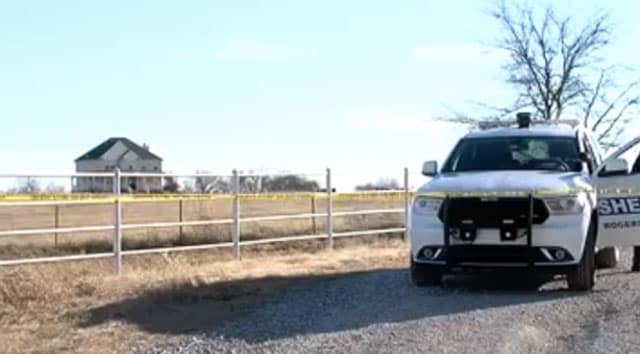 “If anyone in this area tries to break in, look out,” said neighbor Elvera Pankratz. (Photo: ABC)

A serial burglar is in police custody while recovering from a gunshot wound after he broke into the rural Inola home of an Oklahoma assistant district attorney last week.

Green County prosecutor Erin Oquin was home sick when 24-year-old Bryan Starkey kicked in the back door of her home on Thursday. Once inside, he met Oquin, who was armed with a gun. Oquin shot Starkey a single time in the upper chest before he fled from the home.

Starkey drove away in his vehicle, but only got about a mile down the road before reaching a dead end. While driving away, Starkey apparently threw numerous items belonging to Oquin from his car.

Authorities arrived on the scene a short time later and found Starkey suffering from a gunshot wound. He was transported to the hospital for treatment and expected to survive. He will face charges once he is released from the hospital.

Investigators have no reason at this point to believe Oquin’s home was specifically targeted by Starkey for any reason other than the fact that he thought he would be a good score.

“It was unfortunate for our intruder suspect that he didn’t do a little bit more market research and learn who’s door he was kicking in,” Rogers County Sheriff Scott Walton told a local ABC affiliate.

Oquin’s neighbors, who all say they look out for one another, told local media
they were surprised that anyone would try to break into her home, noting that – besides her position – her house is situated in a rural, out-of-the-way area, quite a distance from the main road.

Nonetheless, Walton added that Oquin was ready to deal with the break in and did so, noting that she “certainly took care of business.”

Walton confirmed that Starkey was wanted in connection with a string of burglaries in the area.

“If more of these ended like this we wouldn’t have as many of these crimes,” Walton said.

The investigation is ongoing and, due to Oquin’s ties to the county, is being conducted by the Oklahoma State Bureau of Investigation.