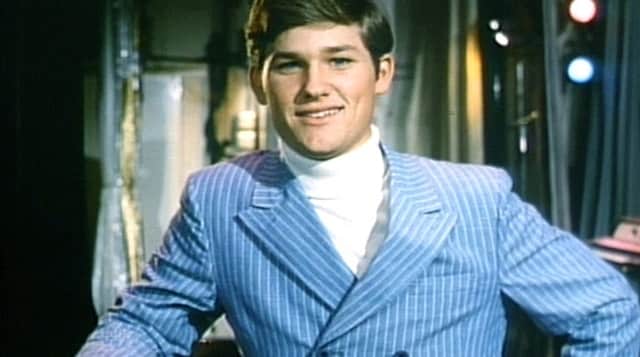 Sure, we could have used the one with the crazy mustache or the professional one the NRA used, but instead we used a photo of Kurt Russell, now 64, in a Disney production from the 1960s.

In the online world of slams, fails, blasts and other sorts of epics, actor Kurt Russell expressed a passionate plea against gun control in the face of questioning.

Promoting the upcoming film The Hateful Eight, Russell dismissed the case that violence in film influences violent acts in the real world.

The interviewer, Jeffrey Wells, asked Russell about the tone the film’s director, Quentin Tarantino, takes in his films by using rugged, gritty characters who are quick to resolve tense situations with tough talk and even tougher actions.

Explaining that the tone of Tarantino’s films and how it hasn’t changed in more than 20 years, both agreed that the current American culture is different than that of the 1990s. That round of questioning led to questions and commentary on gun culture and gun ownership.

Here is an excerpt taken from the original source, the website Hollywood Elsewhere.

Wells: I think there’s a feeling about shootings and violence right now…I think it’s different in 2015 than it was in the mid ’90s. But Quentin is still playing the same game more or less.

Russell: Well, Quentin does what he does. He’s painting a picture, writing, telling a story…like a filmmaker. But to mix and match reality with fantasy is something I don’t understand but that’s just me. I think we should understand the difference. To mix today’s politics with, in this case, a tale about, uh, a fictional tale about the Civil War…

Wells: I’m not talking about politics. I’m talking about a ground-level, water-table…a feeling in people’s bones. People are genuinely…between Paris and San Bernardino the idea of sudden violence becoming a normal, day-to-day aspect coming from the gun culture and everything else…it’s a different vibe, you know?

Russell: I don’t understand concepts of conversation [about] the gun culture. We’ve lived with guns since, what, the 7th Century or something? I don’t know.

Wells: Well, I think we all know…guns are a trope. Not a trope but a totem, a metaphor that disenfranchised white guys need…it makes them feel good about themselves.

Russell: You can say what you want. I don’t agree with that. It’s not my thing.

Russell: If you think gun control is going to change the terrorists’ point of view, I think you’re, like, out of your mind. I think anybody [who says that] is. I think it’s absolutely insane. The problem, the problem that we’re having right now to turn it around…you may think you’ve got me worried about you’re gonna do? Dude, you’re about to find out what I’m gonna do, and that’s gonna worry you a lot more. And that‘s what we need. That will change the concept of gun culture, as you call it, to something [like] reality. Which is, if I’m a hockey team and I’ve got some guy bearing down on me as a goal tender, I’m not concerned about what he’s gonna do — I’m gonna make him concerned about what I’m gonna do…

Wells: I get that.

Russell: To stop him. That‘s when things change. So what has that got to do with movies? Nothing! Movies are movies. They’re like a painting, like a song, like a book…he’s doing his Quentin Tarantino world, which I think belongs on film. I don’t think it has anything to do with anything outside of film. The music, the manipulation of the screenplay. So I can’t connect the dots. It really is hard for me to connect the dots.

Wells: Obama’s point was that the guys on the no-fly list, [there] for good reason because of terrorist connections or suspicions…they can get hold of a gun pretty easily.

Wells: They didn’t kill the people in San Bernardino with cars.

Russell: But they’ve killed others that way, haven’t they? Yeah, yeah. Whaddaya gonna do? Outlaw everything? That isn’t the answer.

Wells: No, not so you can’t, just so the idiots can’t get hold of them [so easily], that’s all.

Russell: You really believe they’re not going to? Are you serious about that? What good will that…? Oh my God. You and I just disagree.