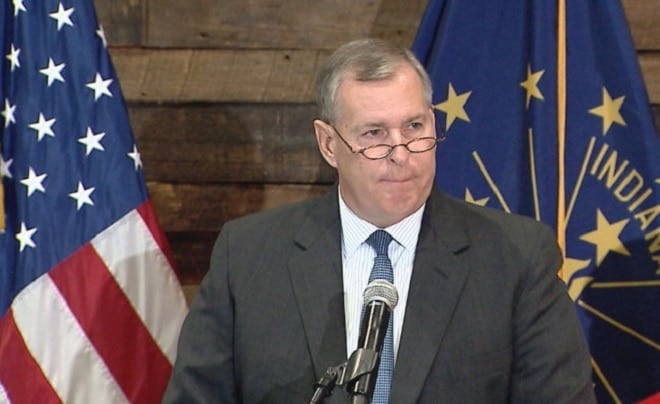 Indy’s Republican Mayor Greg Ballard is expected to torpedo a Democrat-backed gun law that some argue is in violation of state law. (Photo: WISH-TV)

By a single vote on Monday, the Indianapolis City-County Council approved a measure to mandate any guns lost or stolen be reported to police under threat of a fine.

The measure, introduced in July by Counselor Kip Tew, would require gun owners to contact the Indianapolis Metropolitan Police Department within 48 hours of discovering a firearm missing. It passed by a 15-14 vote along party lines in the face of a promised veto by Republican Mayor Greg Ballard.

Despite the partisan support for the issue, the proposal’s sponsor contends its not about gun control.

“This is going to be a tool helpful to law enforcement that had difficulty tracking these weapons when people commit crimes. And this is a way to check back to see where these guns originated from,” Tew said.

The proposed ordinance originally called for reports to be made to the County Health Department, but later amended the language to make reports instead to the police. Those who fail to make such reports would be liable for a token $50 fine plus court costs per gun.

The Mayor’s office, city attorneys and council GOP members argue the proposed law is a step too far and violates Indiana’s strong gun preemption laws adopted in 2011, opening the city for a possible action from either the state attorney general or from Second Amendment advocates.

“As things stand now, he has some significant concerns about the legality and the timing of the proposal,” said Jen Pittman, with Ballard’s office.

While agreeing the ordinance would be in violation of state law, area Second Amendment attorney Guy Relford pointed out on his Gun Guy Show on WIBC Radio that the measure also targets victims of a crime by potentially fining them for being robbed and is unenforceable as there is no gun registry in the state making the prospect of proving individual ownership of recovered stolen guns for the prospect of assessing violations of the law unlikely.

Indianapolis is something of a municipal battleground for gun rights vs. gun safety advocates, being the hometown of Moms Demand Action founder Shannon Watts while simultaneously hosting the 2014 National Rifle Association’s Annual Meetings & Exhibits.

Tew is a well-known crusader for the left and was the state chair of the Barack Obama Presidential campaign in Indiana and former chair of the Indiana Democratic party.

Mayor Ballard, a retired Marine Lt.Colonel who has backed requiring mandatory minimum sentences for those convicted of gun crimes, is expected to take action on the bill in coming days.