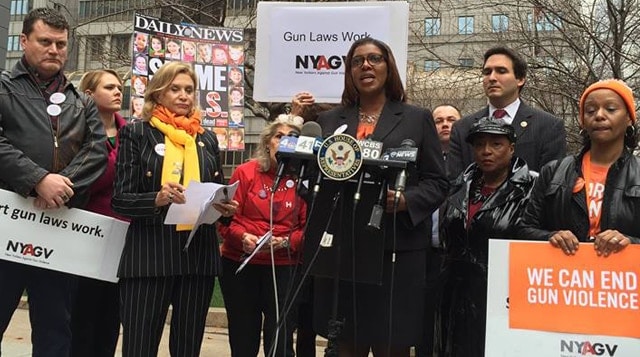 Letitia James, behind the microphones, speaking on the third anniversary of the Sandy Hook school shooting, Dec. 14, 2015. (Photo: Facebook)

New York City’s public advocate raised concerns Tuesday that gun maker Smith & Wesson is failing to inform investors about the risks it imposes on the public by manufacturing firearms.

Public advocate Letitia James asked the Securities and Exchange Commission to investigate the company to see if it has violated U.S. securities laws by withholding the information.

“We cannot let gun manufacturers get away with hiding the inherent risk associated with their industry,” she said in a statement.

In her eight-page letter to the SEC, she argues that Smith & Wesson has a duty to inform investors about how many of the firearms it produces are used in crimes each year, steps the company has taken to reduce the risk that its products are used in crimes and mass shootings, and if it had put in place measures to prevent its guns from being sold by unscrupulous gun dealers.

In the letter, she says withholding those details violates SEC rules that prohibit deceptive practices. Smith & Wesson rakes in more than $550 million in annual revenue and roughly $50 million in profit, according to the company’s financial filings.

James invoked the term “bad apple” dealers to refer to licensed gun stores that sidestep lawful practices in order to increase sales. The Brady Campaign to Prevent Gun Violence, which recently launched a campaign to target such dealers last year, said 90 percent of crime guns are supplied by 5 percent of licensed dealers. Part of the initiative is to have dealers adopt a code of conduct designed to prevent unlawful sales.

However, in 2000, a year after the Columbine shooting in Colorado, Smith & Wesson made an agreement with then President Bill Clinton to impose a code of conduct on distributors and retailers within the company’s sales network. In response, gun rights advocates, lobbies and retailers boycotted the company.

Earlier this month, after the mass shooting in San Bernardino, California, James blasted TD Bank for lending out nearly $300 million to Smith & Wesson. In July, she successfully influenced the city leaders responsible for pensions to divest funds from retailers that earn a substantial portion of their revenue from gun sales.