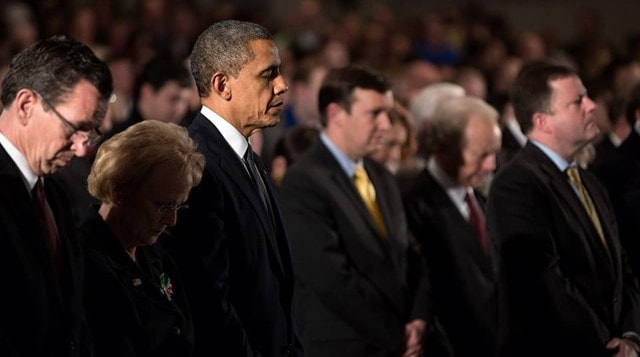 President Obama discusses efforts in passing gun control legislation since the Sandy Hook shooting. Three years after the horrific incident, Congress has not passed a significant gun control law at the federal level.

Three years ago today, a gunman murdered twenty innocent schoolchildren and six of the educators who cared for them at Sandy Hook Elementary in Newtown, Connecticut.

This photo was taken two days later, when I went to Newtown and visited with the families of the victims. It was a town that could be any town in America. They were grieving moms and dads, brothers and sisters, spouses missing the center of their lives at Christmastime – good and decent people who could have been any of our loved ones.

Three years on, how do we tell them that their Congress hasn’t done anything to prevent what happened to them from happening to other families?

Soon after the shootings, I took a series of executive actions within my power to reduce gun violence and keep more of our kids safe. Their governor in Connecticut, Dan Malloy, worked with his legislature to pass some commonsense gun safety reforms – reforms that didn’t infringe upon anyone’s right to bear arms, but actually might have prevented another massacre in the meantime. And two United States senators – a Democrat from West Virginia and a Republican from Pennsylvania, both gun owners, both strong defenders of our Second Amendment rights, both with “A grades” from the NRA – worked together to write a commonsense compromise bill that would have required virtually everyone who buys a gun to get a background check. That’s it. Dangerous people would no longer get to play by a different set of rules than responsible gun owners who bought their guns the right way. Pretty commonsense stuff.

But the gun lobby and its allies mobilized to paint that compromise reform as an assault on our freedom. And even though background checks were supported by some 90% of the American people and a majority of NRA households, the Senate surrendered, voting to block those background checks – even with the families of Newtown in attendance.

Since then, tens of thousands of our fellow Americans have been mowed down by gun violence. Tens of thousands. More kids have lost siblings. More parents have lost children. More husbands and wives have had to bury the love of their life. Sometimes, it’s hard to put specific numbers on this epidemic and its causes – because Congress has actually prevented the CDC, our leading public health agency, from conducting serious research into gun violence. Did you know that? Some years ago, they actually voted to make it harder for public health experts to conduct research into gun violence – but even after San Bernardino, they’ve refused to make it harder for terrorist suspects to buy semi-automatic weapons.

Every time this happens, we’re told that commonsense reforms like background checks might not have stopped the last massacre, or the one before that, so we shouldn’t do anything. We’re not fools – we know that we can’t heal every troubled mind, or stop every act of violence.

But what if we tried to stop even one? What if Congress did something – anything – to save one American, or a classroom of Americans, or a stadium’s worth of Americans from losing their lives to gun violence in the years to come?

I refuse to give up on this. Because I still believe that we can do better. I still believe that we can get this right. We may not have a Congress that’s willing to work with us on this right now. So the rest of us will have to do what we can. I recently tasked my team at the White House to take another look at any other actions I can take to help reduce gun violence. And if you care about this, then please help me – whether you’re a Democrat, a Republican, or neither. We especially need the help of responsible gun owners who grieve with us every time this happens, and feel like your views aren’t being properly represented. I know there are a lot of you. I’ve heard from you. I’ve read your letters and emails.

Let me be absolutely clear – like I’ve said many times before, I believe that the Second Amendment guarantees an individual right to bear arms. Period. No matter how many times people try to paint me as holding a different position. I also believe that most gun owners agree that we can respect the Second Amendment while keeping an irresponsible, law-breaking few from inflicting harm on a massive scale. I believe there is a rational, bipartisan majority in America who agrees that we all have the right to worship freely and safely; the right to assemble peaceably; the right to life, liberty, and the pursuit of happiness – and who doesn’t want to see those rights taken from us, as they were taken from worshipers in Charleston and Oak Creek; moviegoers in Aurora and Lafayette; students in Blacksburg and Roseburg, Columbine and Newtown, and kids on street corners in Chicago too often to tolerate.

America, this will change – but only when we stand up, together, and demand it.