Chattanooga Sailor and Marines to get Purple Heart 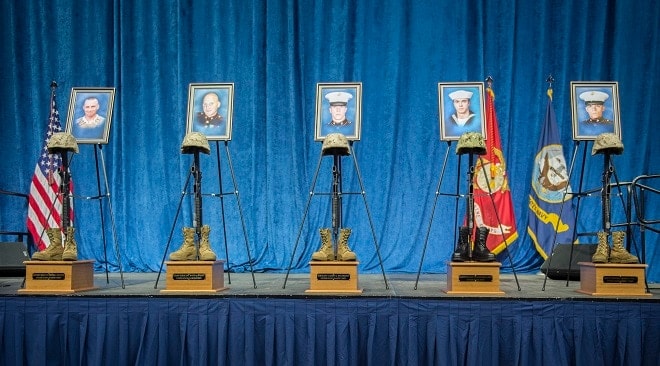 Battle crosses for fallen service members on stage during the memorial at McKenzie Arena at the University of Tennessee, Chattanooga. (Photo: U.S. Navy)

The Secretary of the Navy announced late Wednesday that the five U.S. Marines and one U.S. Navy sailor killed and wounded in the July 16th terrorist attack will receive the Purple Heart.

The attack, which began as a drive-by shooting at a strip mall recruiting center then continued at a nearby U.S. Navy Reserve center. At the end of the incident, the gunman and four Marines lay dead. A Navy sailor, a Marine recruiter, and a police officer were wounded in the attack, with the sailor dying from his injuries two days later.

Secretary of the Navy Ray Maybus released the following statement;

“Following an extensive investigation, the FBI and NCIS have determined that this attack was inspired by a foreign terrorist group, the final criteria required for the awarding of the Purple Heart to this Sailor and these Marines. This determination allows the Department of the Navy to move forward immediately with the award of the Purple Heart to the families of the five heroes who were victims of this terrorist attack, as well as to the surviving hero, Sgt. Cheeley.

“Although the Purple Heart can never possibly replace this brave Sailor and these brave Marines, it is my hope that as their families and the entire Department of the Navy team continue to mourn their loss, these awards provide some small measure of solace. Their heroism and service to our nation will be remembered always.”

As noted by the Military Order of the Purple Heart association, the honor is a combat decoration awarded to members of the armed forces of the U.S. who are wounded by an instrument of war in the hands of the enemy and posthumously to the next of kin in the name of those who are killed in action or die of wounds received in action.