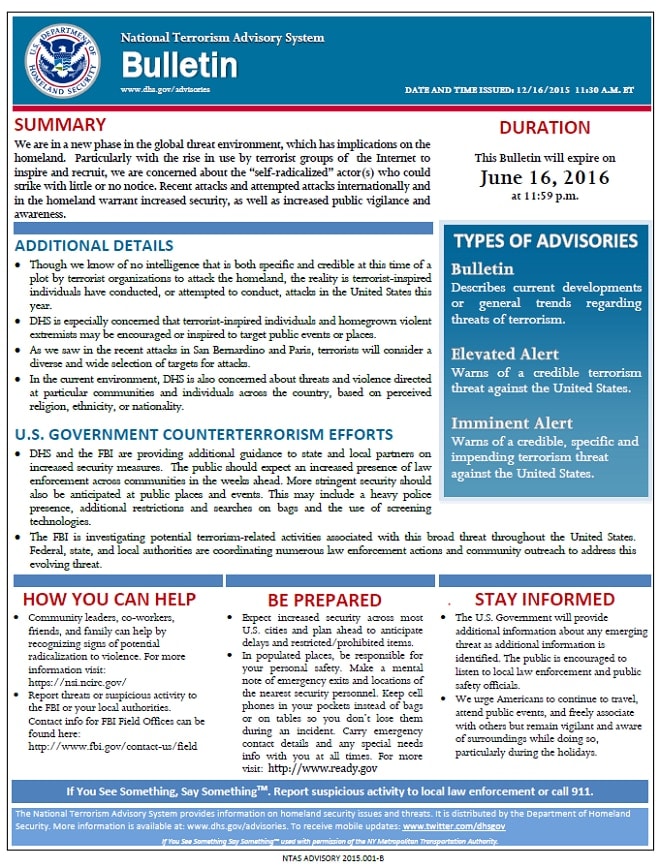 “We are concerned about the ‘self-radicalized’ actor(s) who could strike with little or no notice,” reads the terrorism alert from the U.S. Department of Homeland Security.

Issued on Dec. 16 through the National Terrorism Advisory System, a Bulletin is the lowest of three levels of advisories and describes general trends and developments. The two higher levels, that of an Elevated Alert and an Imminent Alert, warn of more credible and specific threats.

“As we saw in the recent attacks in San Bernardino and Paris, terrorists will consider a diverse and wide selection of targets for attacks,” reads the advisory.

“Particularly with the rise in use by terrorist groups of  the Internet to inspire and recruit, we are concerned about the ‘self-radicalized’ actor(s) who could strike with little or no notice. Recent attacks and attempted attacks internationally and in the homeland warrant increased security, as well as increased public vigilance and awareness,” it continues.

While advising the Federal Bureau of Investigation is investigating potential terrorism-related activities associated with this ambiguous threat throughout the country with local partners, and cautions to expect a heavier than normal police presence public places and events this holiday season, it details steps the average person can do to help respond in the event of an attack, such as keeping mobile devices in your pocket rather than in bags so they aren’t left behind or dropped in an incident.

“We urge Americans to continue to travel, attend public events, and freely associate with others but remain vigilant and aware of surroundings while doing so, particularly during the holidays,” says DHS.

The full bulletin can be read here.