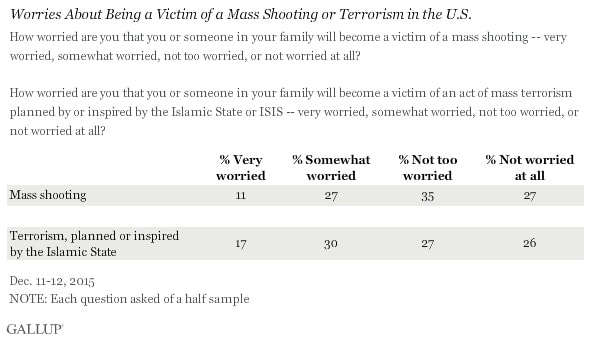 More Americans are afraid of becoming a victim of terrorism than they are of a mass shooting, according to the results of a survey released by Gallup.

Forty-seven percent of those surveyed said they are “very” or “somewhat” worried that they or a family member will become a victim of an Islamic State-inspired terrorist attack. Whereas 38 percent said expressed worry about a mass shooting.

Gallup conducted the poll Dec. 11-12 and interviewed 1,016 people older than 18 years of age and from all 50 states. The results are similar to those of another Gallup survey conducted just a couple days before, but made no mention of ISIS. That poll resulted in 51 percent saying they’re worried about being a victim of terrorism. 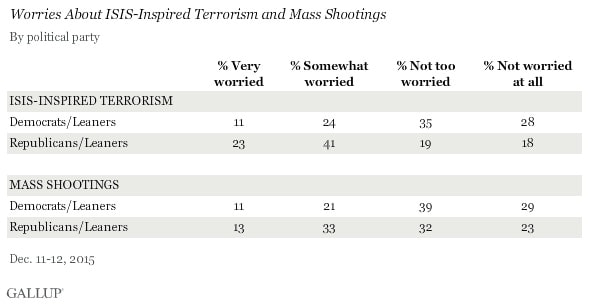 On the other hand, 63 percent of Democrats surveyed said the are either “not too worried” or “not worried at all” about ISIS-inspired terrorism and 55 percent expressed the same views about a mass shooting.

Both issues have been at the forefront of political discourse since authorities revealed that the suspects responsible for a mass shooting in San Bernardino, California, were inspired by ISIS. Although that incident combines both issues, the debate about which is deadlier is still ongoing.

However, after a gunman killed nine people at a community college in Oregon in October, President Obama asked the public to compare Americans killed by terrorism to gun deaths over the past decade in the U.S.

According to Politifact, the answer to that question came to 71 people killed by terrorism and 301,797 people killed by firearms. Yet, an actual tally on terrorist plots is unclear and the figure of gun deaths includes homicides, suicides and those killed by police.

According to Shooting Tracker, a website dedicated to tallying mass shootings, which it defines as four or more shot without a cooling off period “no matter the cause or intent of the toll of victims,” there were 336 mass shootings in 2014, and an estimated 353 mass shootings so far in 2015.

Despite the statistics and the viewpoints, the crime rate, which includes violent crime, is historically low and has steadied at that low point.

Correction: A previous version of this article incorrectly stated how the Mass Shooting Tracker defines a mass shooting.